Now a restaurant group consisting of five restaurants in Haymarket (the Dixon St branch is one of two), Burwood, Chatswood and Glebe, the one on Dixon St is the original, opened in 2002. Although notionally on Dixon, the entrance is in fact on Little Hay St, up a flight of stairs.
Covering several floors, the restaurant was already buzzing with early diners by the time of our arrival at 630pm. Space is a premium, and tables are situated fairly close together, though not closely enough to be of any discomfort.
Although dining with people with a tolerance for chilli, the dishes selected turn out to be probably the mildest dishes available there, and it certainly was quite a different experience to my previous visits to Red Chilli 2. 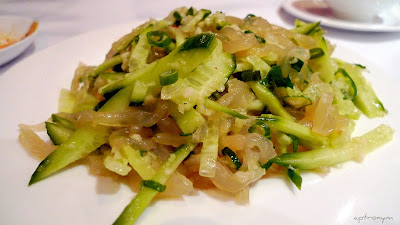 Shredded Jellyfish and Cucumber Salad ($8.80)
The jellyfish dish was my choice, selected because it is one of my favourite starters. (it's sometimes  includes shredded chicken, as well). I enjoy the coldness, the crunch and the texture. It was the others' first experience with jellyfish served in this manner, and for them, it was an interesting but successful experience. The cucumber was still crisp and the light dressing's sesame taste not too overwhelming. As the jellyfish has no inherent taste of its own, the dressing is the key. 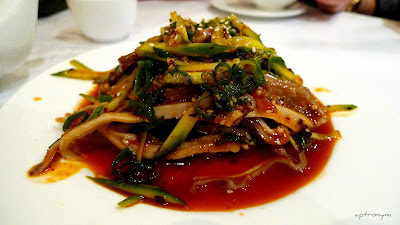 Shredded tripe with Sichuan chilli and pepper sauce
Confession - I did not eat this dish, so all views expressed are those of the others. They are big tripe eaters, and had expected something different (as in a hot rather than a cold dish), an assumption which I had not realised until it came out. That all being said, it was one of their favourite dishes that night; they enjoyed the textures of the tripe, and did not find the chilli sauce too overwhelmingly chilli. 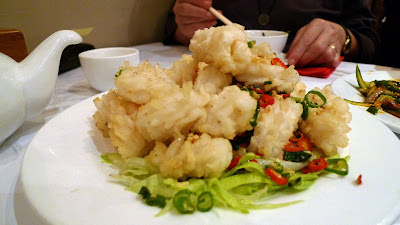 Salt and Pepper Calamari ($19.50)
Red Chilli's rendition of what has become not only a yum cha staple in Sydney, but a popular pub dish as well. A few years back, the city was in danger of disappearing under its ubiquity, but despite having its appearance scaled back somewhat, it remains a favourite dish of many people.
This was a decently sized serving; the calamari's coating was not overly thick, but a bit more chilli would have not gone astray. All in all, a fairly solid exemplar, but nothing special, though better than many yum cha versions here in Sydney. 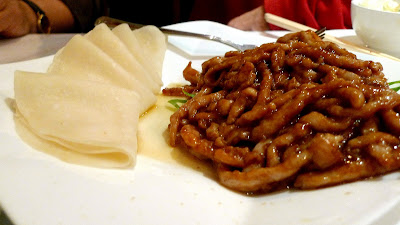 Stir fried shredded pork with Peking sauce and shallots ($16.80)
The meat to pancake ratio was simply unbalanced for this dish. There was more than enough meat for double this number of pancakes, and it would have been good to have been either had more pancakes served with the dish, or been asked as to whether we wished for more. The meat itself was tender and moreish, though the sauce was a tad on the sweet side for my palate (the sauce does have a sweet component to it). 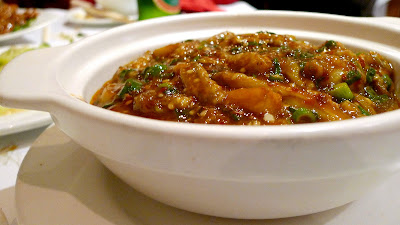 Braised eggplant hotpot
An old favourite which I haven't eaten in a long time, this was a going-out staple of my childhood. There is something of the comfort food in eggplant that has been cooked for a period of time which renders it soft and yielding to the bite, but yet still keeps its form, enveloped in the familiar again slightly sweet sauce, with the shallots giving a bit of additional texture and lifting the dish. There is nothing complicated about this, it's just the sort of dish that you load into your rice, mix up, eat, and enjoy.
This branch of Red Chilli is more workmanlike than its sibling around the corner, the air circulation was a little lacking on the day, as was the service, but it's a reasonably priced restaurant, good for a fairly quick decent meal, and with a good balance of items that are mild in flavour for those who cannot take the full impact of Sichuan food.
Red Chilli Sichuan Restaurant
51-53 Dixon St
Haymarket
Sydney NSW 2000
Ph : (02) 9211 8122

Jellyfish, shredded pork and eggplant would all definitely be on my menu picks too!
Though I've still yet to visit one of these Sichuan establishments...

@Tina - Love that eggplant dish, pure comfort food. You should try one of them, would love to hear what you think.