When we talk about the major players in the Swiss watch movement manufacturing, certain names come immediately to mind - ETA is generally the first, mostly followed by Sellita (keeping in mind that Unitas and Valjoux are part ETA). However, there could soon be a third vying for attention, once their new factory is fully operational sometime in 2021-22.
If you guessed Kenissi, you’d be correct. If your reaction is “huh?” then keep reading.
Not much is known about Kenissi’s founder, only that the owner is an industrial supplier of sapphire crystal across the industry. It moved into movement manufacture, managed by Eric Yvon Pirson (head of Tudor), Jean-Paul Girardin (formerly of Breitling), and Philippe Jacques Dalloz. They are constructing a new movement production site (within a building that will be 150m long) in Le Locle, (home of Zenith, UN, Tissot, Mont Blanc and others) on land owned by Rolex, but with ownership shared between Tudor, Kenissi and Chanel.
Kenissi already produces movements for Tudor as their “Manufacture” movement, which debuted in the Tudor North Flag (2015), followed by Breitling in 2017, and then in a highly finished form for the new Chanel J12 in 2019.
The movement itself is well known, and the specs are nothing to sneeze at. It features a full balance bridge with two fixed points for added structural rigidity and shock resistance, COSC-certifiation, and with a very practical 70-hour power reserve. The GMT version features a jumping hour which allows the wearer to easily set the local time as well as changing the date backwards and forwards at any moment.
The new ‘Manufacture’ will mean a massive increase in production capabilities and will allow ease of continued supplies to Tudor and Breitling as well as simultaneously expanding their client base, which already includes Norqain and more recently, Fortis. Given the trajectory, it is not farfetched to consider that more brands will look to Kenissi as a possible alternative to ETA/ Sellita, with Bell & Ross a strong contender to be next (possibly due to its Chanel connections).
Who is Norqain?
Norqain is an independent, family-operated business that was founded in 2018 by Ben Küffer (formerly of Breitling), who brought on his father, Marc Küffer, as Chairman of the Board. Marc was the owner and CEO of Swiss luxury watch producer Roventa-Henex (a private label watchmaker since 1959 - making watches for the likes of Farer), member of the Board of Directors of the Swiss Watch Industry Association for 25 years and also being on the board of Ulysses Nardin. Ted Schneider, from the family that owned Breitling for nearly 40 years, and Mark Streit, the Swiss ice hockey legend and Stanley Cup winner, are also part of the management and board. It also has close ties to Breitling via Kenissi in the form of Jean-Paul Girardin, who oversaw the development of Breitling’s manufacturing capacities, moving there after it was sold to CVC Capital in 2017. Norquain’s dedication to quality, design, and value for money quickly made it a favourite amongst industry insiders.
Fortis are still around?
Yes. They had financial difficulties back in 2017/ 2018, and were taken over by Jupp Philipp, who was a big fan of the brand, but with a background in the food industry. It took him nearly eight months to assess the company and analyse the business before signing on the dotted line in September 2018. Since then they have devised a roadmap for Fortis, and with Kenissi on board, they hope to develop the brand into a contender for the likes of Breitling, Tudor and IWC.
The attraction of the Swiss watch industry may be that of the shiny new products being released every year, but behind every flowery PR prose, there are not just the watchmakers that assemble the watches, the artists who decorate them, but also the parts suppliers, without whom there would be very few watches produced.
The possibility of a third significant player in movement supply is also interesting because it means more competition, and competition is always good for an industry, and this could possibly lead to better pricing. There is a lot of uncertainty in the watch industry at the moment, and there are also concerns about possible job losses in the coming 12 to 18 months, a firm who will probably be taking on more employees is also a welcome thing.
Posted by The Sydney Tarts at Friday, June 26, 2020 No comments:

2020 so far has been a funny year. Not so much ha-ha funny mind you. I won't bore you with the details though, assuming if you're reading this, you already know full well what's happened...
And here we have Patek, launching a watch from the previous year (yes that's right. They even tell us so on the case back) meaning it has already gone up in value, given it's a steel, limited edition, casual dress/sports watch with a blue dial.
The year has been so strange that even us, The Sydney Tarts, having lain dormant for the best part of errr... 5 years?? Felt it necessary to revitalise and re-energise, and resurrect ourselves and start posting again, as we are in a completely "unprecedented" times.
Enough of a tangent though. Let's get back to the watch. Patek is well known for saying that their clients do not actually own one and are merely temporary guardians until their offsprings can lay claim to the sound investment that is luxury watches and ideally sell it to fund further education or perhaps, more investments. And no doubt this watch will be an investment, as steel Calatravas aren't all that common, and this model is only limited to 1000 pieces.
A quick run down. The watch is 40mm. powered by calibre 324 (the PP equivalent to the JLC 899 or the ETA 2892-A2). It is automatic, so the shortish power reserve won't matter. But even then I do have doubts just how many of the 1000 pieces will actually be worn and how many will be safe queens, and become a part of an investment portfolio. It'll retail for the AUD equivalent of around about $42,000. that's considered a bargain by Patek standards. Trust me.
There are 3 hands, and a date at 3:00, complete with black numerals on white background. Hour markers and hands are lumed. Matte blue dial with the door to the Ninja Turtle's NYC abode as the central decoration. Thick bezel aids in the overall "balance" of the design, finished off with a blue strap and a pin buckle.
So, 1000 pieces worldwide. That can't be too difficult to come by, provided you have a spare $40k to spend post COVID-19, what with the pent-up urge to spend and such and such? Well, don't forget, this is Patek steel watch territory. Meaning it's not as easy as it sounds. Just because you have the dough doesn't mean you get to go...
Oh and yes. The watch celebrates a new Manufacture that they built in Plan-les-Ouates, Geneva, costing 600 million CHF. 10 floors all up; 4 underground. Brings all the crafts under the one roof. (a la Jaeger-LeCoultre and Zenith...) A restaurant for 880 guests, parking for 700 cars, 4 VIP lounges. 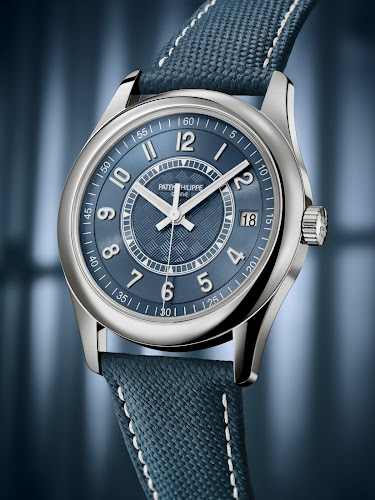