Green is the new blue.

Previous years there has been a few splatter of green dial watches. Nothing dramatic and most of the time paired to a bronze case. But 2020 seems to be the year where being seen to be green is in fashion.

Green is a symbol of hope, luck, growth, and nature in many cultures. Today, it also symbolises environmental protection. There is nothing more eco-friendly than a watch that is powered either by the movement of your wrist or a simple wind up of a mainspring which stores energy in a barrel, which will continue to run (with careful maintenance) for decades?

Now, stop being green and think the grass is greener on the other side. Here are a wristful of green watches that will surely make others green with envy. Go ahead. You have the green light.

The following is a list of the top 15 green mechanical/automatic simple 2/3 hand watches with/without date we could find that were launched in just 2020 alone. In alphabetical order: 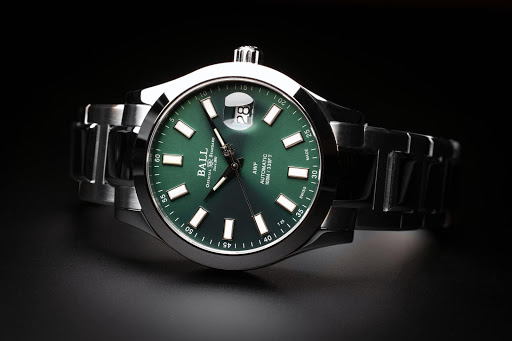 The collection is directly inspired by the navigation tools of aircraft cockpit. The new BR03‑92 H.U.D (Head-Up Display) gets inspiration from the avionics displays of fighter jets equipped with the most cutting-edge technology. The case is matte black ceramic, 42mm, green sapphire crystal and water resistant to 100m. Power reserve of 38 hours. 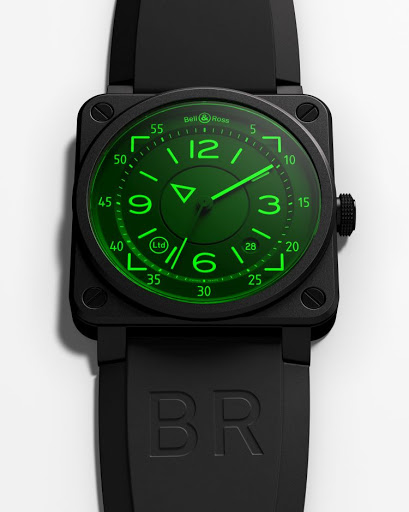 A special watch dedicated to protecting the great Hammerhead shark. This model will be available exclusively in Blancpain boutiques in New York and Las Vegas. A total of $50,000 will be added to the brand's regular contributions to promoting, respecting and protecting the fascinating world of the oceans. Case is in black ceramic, measuring 43.6mm x 13.8mm. Water resistant to 300m, powered by in-house calibre 1318 with 120 hours power reserve. 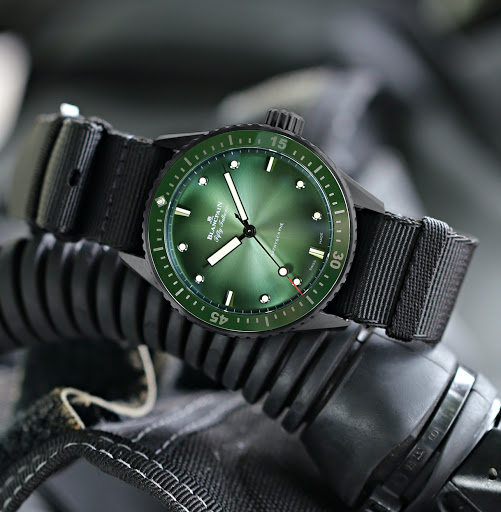 It features a green guilloché dial inspired by the lotus flower that reflects sumptuous shades. This timepiece is also housed in the Amadéo® convertible 36mm stainless steel case. The bezel and the iconic bow are set with diamonds.The case's convertible feature allows the timepiece to be worn on the wrist, transformed into a table clock or turned into a pendant without tools. Total of 1.04ct diamonds. Water resistant to 30m. 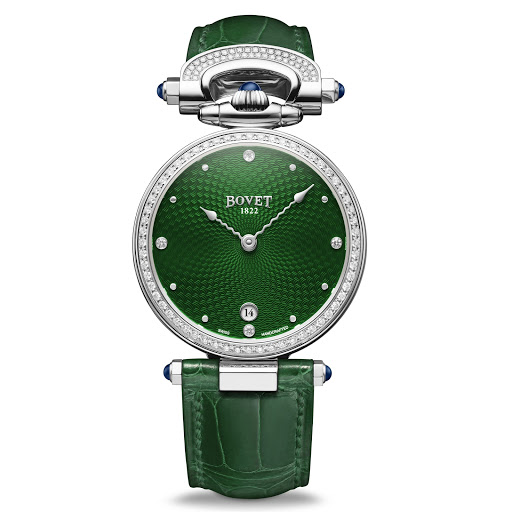 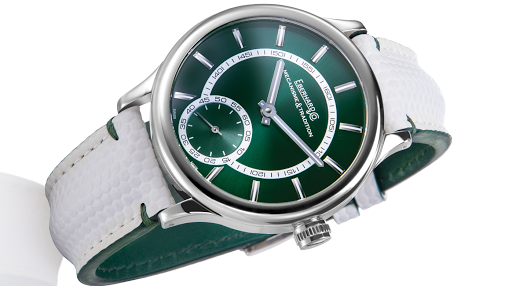 The Vintage Rally "Healey" limited editions were created as a result of a partnership between the Frederique Constant Manufacture and the Austin-Healey car brand. Established in 2004, the bond has never been broken; seventeen years of allegiance and fellowship between watchmaking and mechanics, punctuated by rallies, meetings, races and a shared passion for retro design. 40mm stainless steel case, water resistant to 50m. The caseback has been engraved with an Austin-Healey and powered by Frederique Constant caliber FC-303 with a power reserve of 38 hours. 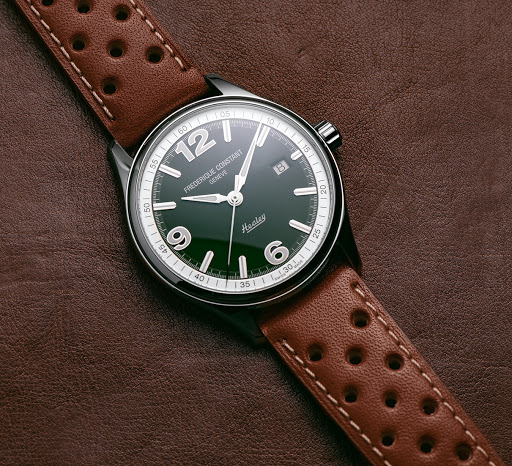 To commemorate the first anniversary of Kurono, made by watchmaker Hajime Asaoka. Stainless steel case with a high curvature sapphire crystal, powered by Miyota's calibre 90S5, with a 42-hour power reserve. Proudly made in Japan and hand assembled. 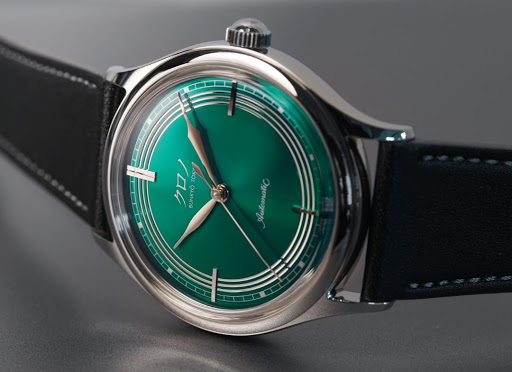 Housed in the Classic, pebble-shaped case, this new version is cased in grade 5 titanium. The hand-wound Calibre LF 116.01  is equipped with a free-sprung balance and a Breguet overcoil. 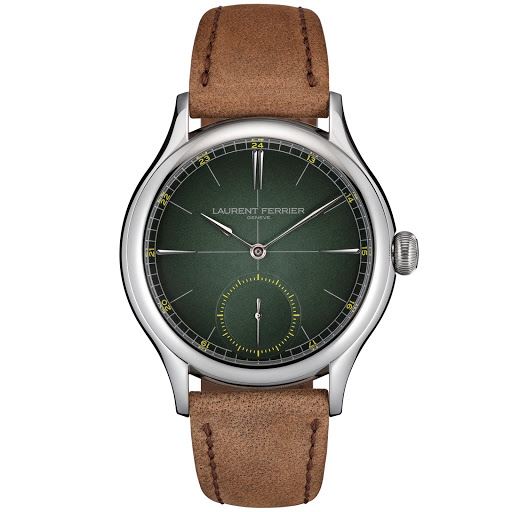 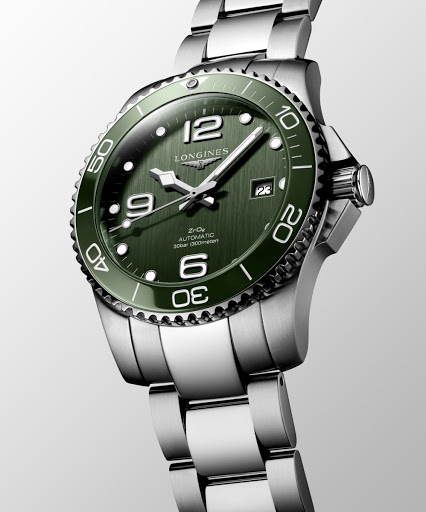 40mm case in 18kt yellow gold, a steel caseback with Minerva Manufacture engraving, water resistant to 50 meters. Powered b by Montblanc caliber MB 24.27 (base Sellita) with a power reserve of 42 hours. It features a flat hairspring and a flat hoop balance. 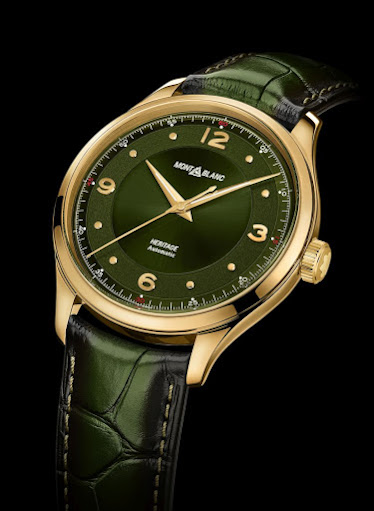 11. Norqain Independence 20 Limited to 200 pieces
We mentioned the brand Norqain before, and this is the first piece to use the Kenissi movement. Stainless steel case, 42mm diametre, Kenissi movement with 70 hours of power reserve. Water resistant to 100m. 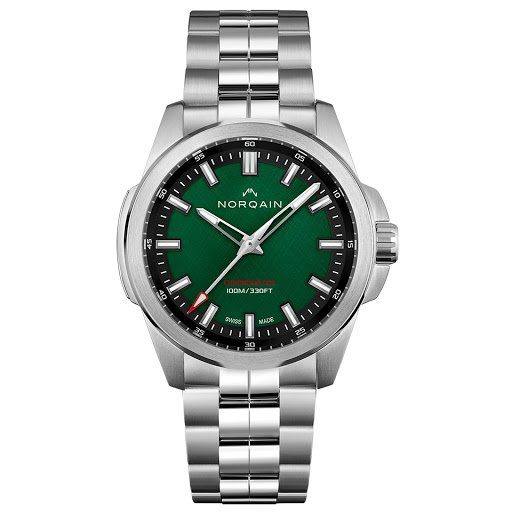 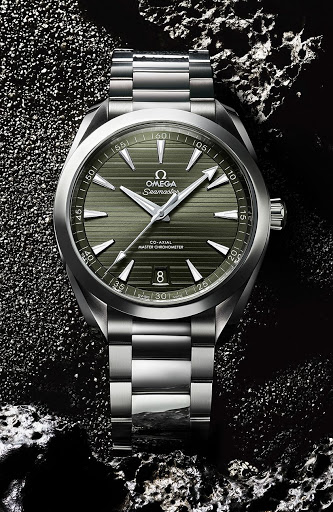 This special steel and bronze version of the Oris Divers Sixty-Five is made in collaboration with the independent Japanese company Momotaro Jeans. Named after a Japanese folklore hero, Momotaro was launched in 2006 by Hisao Manabe. Its roots lie in his textile company, which he established in 1992 with just three employees in the small coastal town of Kojima in Okayama. Stainless steel 40mm case, rotating bezel with bronze edge. Water resistant to 100m, powered by Oris calibre 733 (base Sellita SW200-1) with a power reserve of 38 hours. 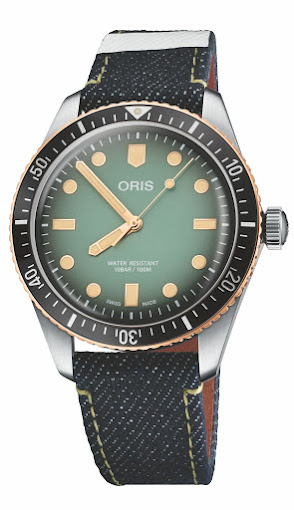 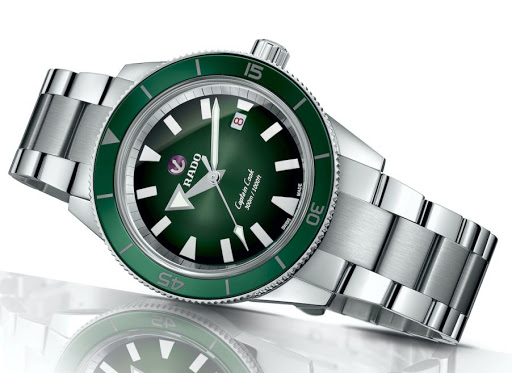 This limited edition watch will donate all profits to the Wellcome Trust COVID-Zero Research Fund. 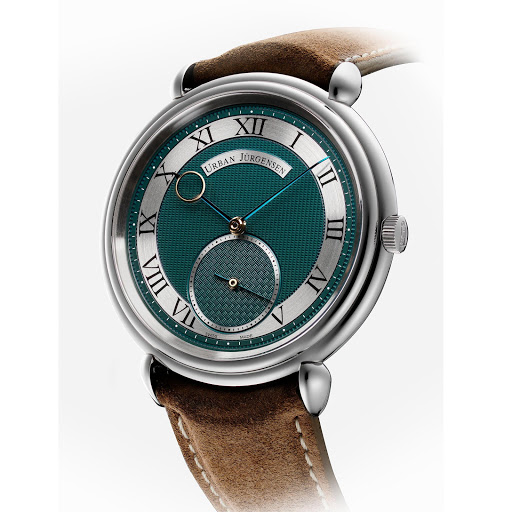 Posted by The Sydney Tarts at Tuesday, August 25, 2020 No comments: 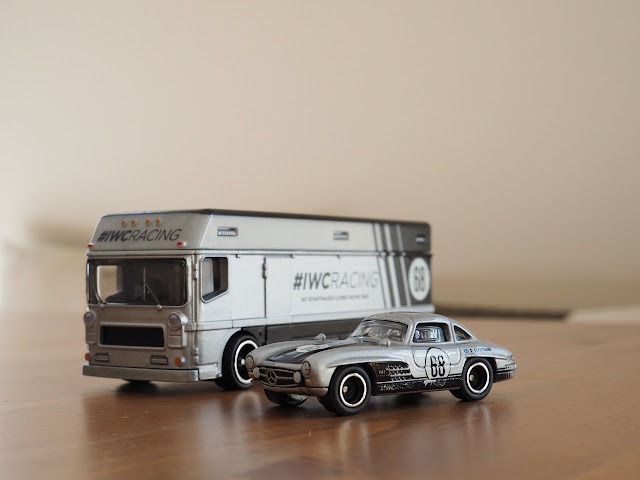 Collabs are nothing new. Fashion. Music. We can all rattle off at least half a dozen car/watch collabs. This was certainly not something I’d expect to happen at all and it was quite the nice surprise when I first knew of its existence.

Is it an obscure collab? Perhaps. But cars and watches do go together and it’s kinda only logical for that to extend to model cars, and by virtue of association, toy cars. You might think of Hot Wheels as toys. And yes, primarily they are toys for kids. But they are also collectable for... those who are kids at heart. 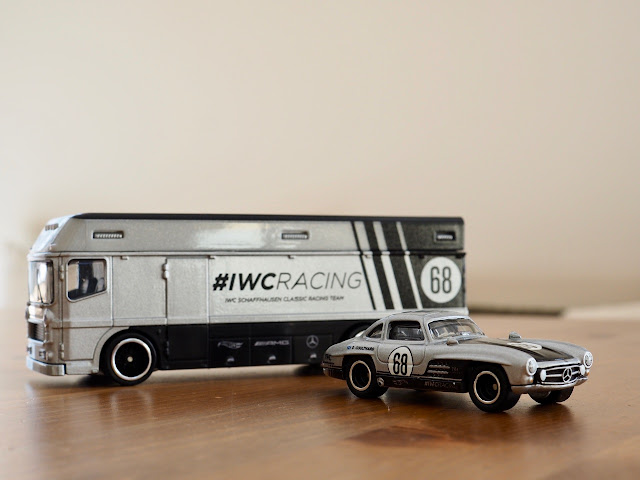 So how did this collab come about? It helped that IWC has a historical racing team, featuring none other than the famed Mercedes-Benz 300SL Gull Wing. It also helped that Chris Grainger just happened to be a Hot Wheels collector, and you can see his collection in an interview he did with Lamley Group. Of course, having one of the Hot Wheels designers being a watch enthusiast sealed the deal. I don’t think there would be that much crossover between Hot Wheels collectors and watch enthusiasts, but I just happen to be one of them. 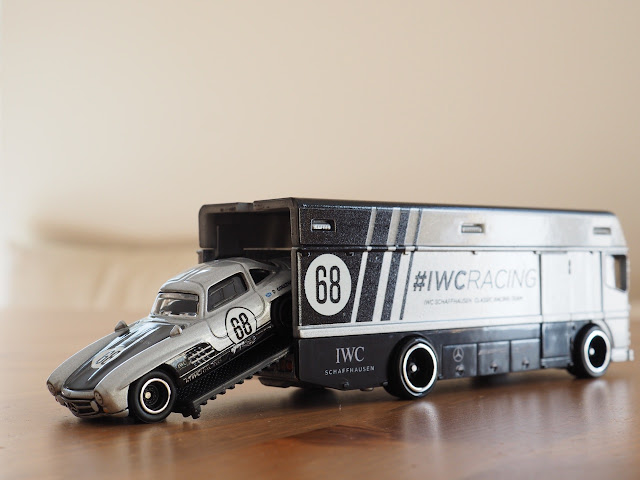 Knowing about this and actually finding it in stores are two completely different things. If anyone from Hot Wheels/Mattel Australia is reading this: fix it!!

The lack of consistent distribution in Australia makes collecting and tracking down certain highly sought after models a real pain in the backside. (Yes. Highly sought after. Don’t get me started. Oh ok you did.) At the moment, in Australia, certain Japanese cars are all the rage. To give you an example, the Nissan 300ZX. This, I have never seen at retail, apart from the most recent police livery which isn't as popular.

I don’t have the time to do the rounds every single day and even then you’re never really sure if 1) the stores actually received allocation of certain boxes and 2) whether the staff at said store actually displayed ALL the cars from a case rather than keeping then and buying it themselves and scalp online to supplement their income and 3) let's say all the cars are displayed on the pegs, you’d have to be at the right store at the right time and hope and pray that it hasn’t already been cleaned out by professional collectors/scalpers.

I’ve seen this in action personally where during one of my rare rounds of all the stores that stock them, I’d see the same 1 or 2 people doing the exact same route. And all of us leaving empty handed became we were all too slow. Or just didn’t have the right “connects”. And then you have the overstock of certain cases, where the pegs would be overflowing with the same few cars and they stay on the pegs forever because anyone that wanted one, or 10, already have them, but if these stay on the pegs the stores aren’t going to refill them with something new.

But that’s a long rant way off on a somewhat related tangent. Back to the model at hand. 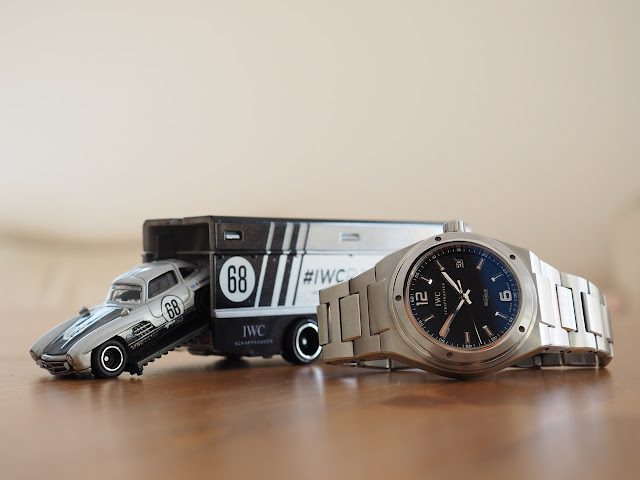 When I saw this I felt like I’d won the lottery. Yes it is exactly like that. It’s not an empty metaphor. I’ve seen and bought others from the set, but this particular model was a rare sight indeed. well, to be fair, any real world sighting of team transport is hard to come by. But I guess the monster trucks are the best seller, considering how much stock and variations are stocked everywhere...

So how much do I like this set? So much so that i resorted to forking out ebay tax for another one. Why you ask? Because it’s the nerdy collector in me. Must be mint in box. Or at the very least, to have one to open and play/display, and another in box to keep. 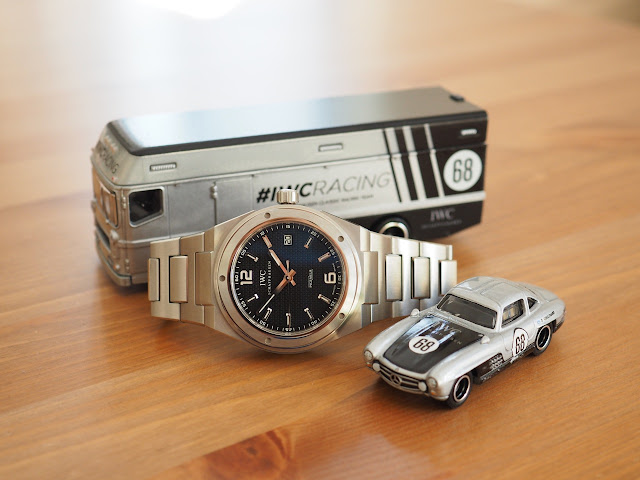 Look, I think for the majority of Hot Wheels collectors, this collab might not mean much to them. You get a nice 300SL and the truck is a brand new casting. The colour scheme is well done and it is overall a fairly nice model at the price point. I doubt many of these will go to kids as toys. For me, it’s one of those rare items where it appeals to a couple of my hobbies.

I have decided to pair the model with an IWC Ingenieur in the photo shoot. No this isn’t current anymore, but i felt this was the best iteration and style for the Ingenieur. It also should be the feature range of the watch for the Mercedes-AMG Petronas F1 team (and it was, in the first couple of years of the partnership), given Ingenieur = Engineer, and yes I get that ”pilot” in French also applies to the f1 drivers, but it’s a bit of a stretch... 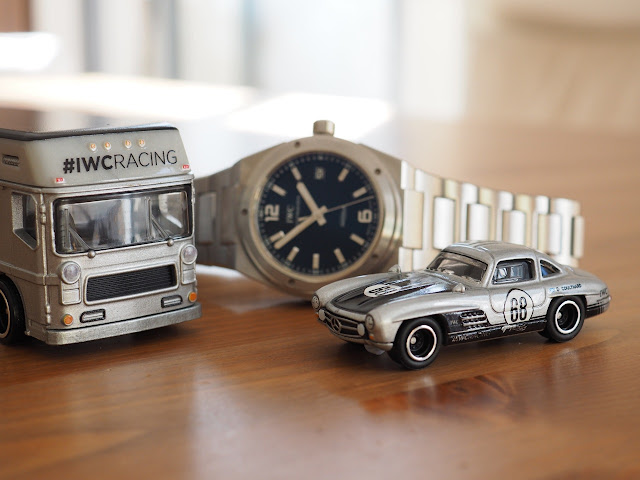 Is this a review on the model? Nope. Just sharing my thoughts about an improbable collaboration between Hot Wheels and IWC Schaffhausen. I would love to see more coming from this pairing. The models aren't bad at all, especially considering the retail price it is set at, and it's likely my favourite Team Transport so far. 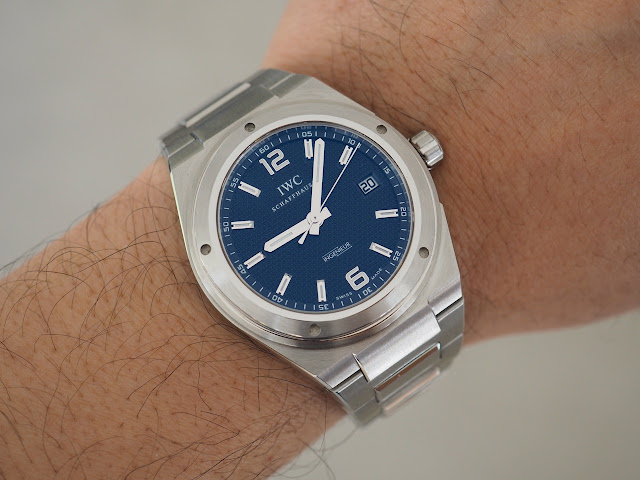 Posted by The Sydney Tarts at Wednesday, August 19, 2020 No comments: