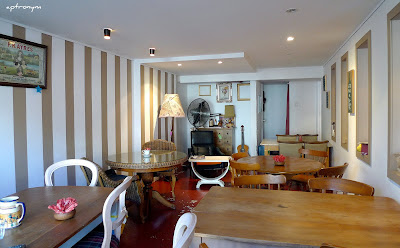 Ah bruschetta, you poor commonly misprounounced word. Its origins date back to approximately the 15th century in central Italy, its oldest version consisting of roasted (the name itself has its etymology in ‘bruscare’ meaning ‘to roast over coals’) bread rubbed with garlic and topped with extra-virgin olive oil, salt and pepper. The most commonly version seen outside of Italy nowadays is probably be the one also involving tomatoes, but historically, seasonality would determine their presence (with some basil) atop the bread. There are a myriad of popular toppings such as beans, red peppers, cured meat or mozzarella.
Taking the bread base and turning it into an entire concept, Bruschetteria 102 has managed to stay as a relatively under-the-radar café in the increasingly manic Surry Hills, where eateries seem to be opening up every other week. 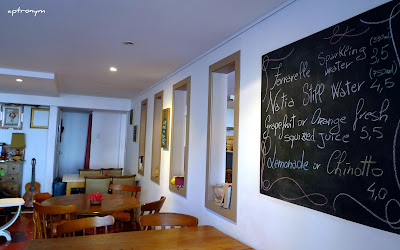 Situated diagonally opposite one of my long-time favourite Surry Hills places, Bruschetteria 102 consists of a small outdoor seating area at the front and two rooms, the first one dominated by the counter and small open kitchen. The second room is a wonderfully airy room, with a lot of natural light. 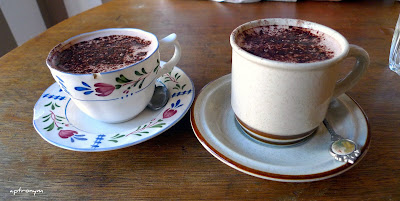 Nutella Hot Chocolate
The counter area has one of those large jars of Nutella which one is never sure  as to whether it is used, or remains a prop. Either way, it does appear on the menu, including Nutella coffee and a Nutella hot chocolate.
Even for those with a fairly sweet tooth, the first mouthful is a bit of an intense sugar hit. You become accustomed to it after the third mouthful, after which the richness of the hazelnut chocolate combination becomes increasingly appealing.


One note though, the quirkiness of using old tourist-oriented souvenir spoons and mismatched old cups and saucers is nice, but chipped cups are not. 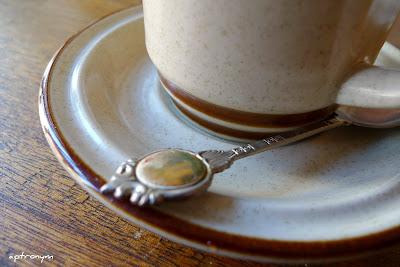 Although 102 has a small (non Bruschetta oriented) dinner menu, it was Bruschetta that we had come for. The toppings are varied, including vegetarian options, and the selection does change seasonally. 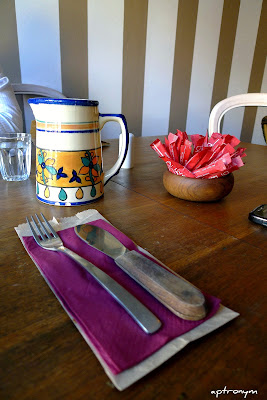 The cutlery comes in a brown paper bag. 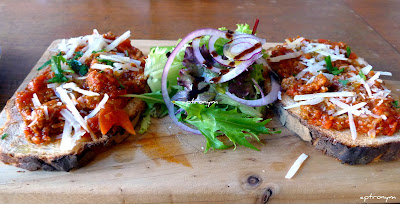 Ragù Rustico
I believe that this is their “signature Bruschetta”. Served with a small salad, the bread was decently toasted and the simple flavours of the slow cooked ragù topped with parmesan was good, but perhaps the topping could have been a tad more generous.

Salssicia
I've read that the Salsicca has been previously served with other salads in the past, but on this occasion, it was the same mixed leaves that appeared with the Ragù Rustico. The topping was more generous in this instance, the flattened salsiccia patty juicy and chunky.

Unfortunately, both of us found the bruschetta a little hard to cut. The blade sof the knives were  a little blunt and a little short, so we found ourselves occasionally sawing the bread. 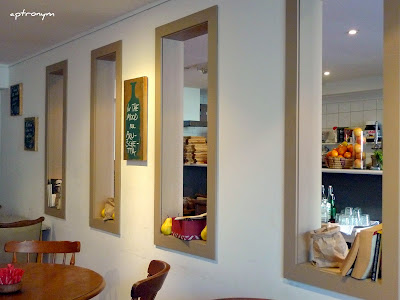 Bruschetteria 102 appears to prefer facebook (where you can see the regularly changing dinner menu), but if you're going to have a website, it's probably best to keep it up to date as well. The dinner menus are short and sweet - two types of bruschetta followed by mains of a soup, a pasta and a third dish, and two dessert options.
Some of the furniture and knick knacks at 102 are for sale (look for the price tags). I don’t quite know whether this has been a successful enterprise, but changing furnishings aside, it is a pleasant place to be. There is very much a daytime feel to this place, and it seems particularly suited to weekend breakfast/ brunch/ lunch business, but it is also open for dinner Thursdays to Saturdays. It’s really quite a pleasant place to be; the sort of café where you can relax, and with a strong local neighbourhood feel to it.
Bruschetteria 102
102 Albion St
Surry Hills
NSW 2010
Ph : (02) 9281 3653

oooh, it's the site of the old Cafeish! it's lovely... LaLa was v taken by their nutella coffee and their odd pieces which were available for sale. agree. if u have anything, pls maintain it... esp resto websites