A large casual cafe and deli (though more the former than the latter) situated a few minutes past the Newtown train station, I ended up here as a part of my "Reuben phase". I'd read about a sandwich here which wasn't exactly a Reuben, but which was apparently still worth heading to Newtown for. 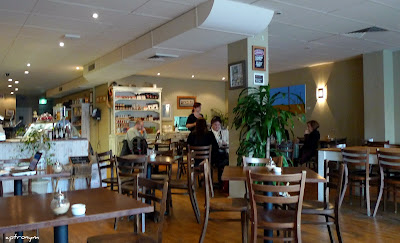 Especially for those used to the smaller cafes in Sydney, 2042 is a large establishment, with sofas at the front, facing King St. Their menu is available on their website, and consists of a standard mix of breakfast items, half a dozen main sized salads, sandwiches, a compact dinner menu, and a kids' menu consisting of four items. 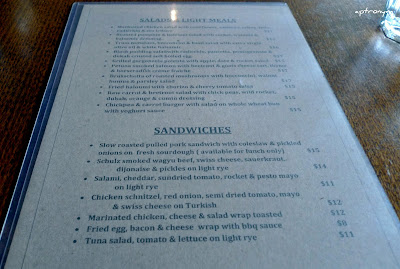 First up, Roasted pumpkin and haloumi salad with rocket, pine nuts and balsamic dressing ($15). A meal unto itself, generously portioned, and no skimping on any of the listed components or overuse of rocket at the expense of everything else. 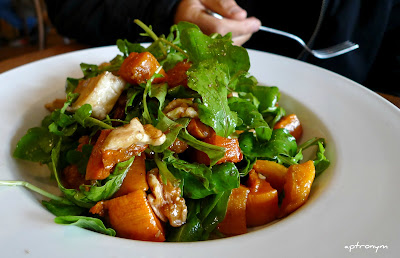 The marinated chicken salad with cauliflower, cashews, celery, fetta, radicchio and cos letuce salad ($17.00) was similarly generously sized. The dressing was not overpowering and the high point was the cauliflower, which had been deep fried (yes this is a note to those who believe that everything tastes better when deep fried). 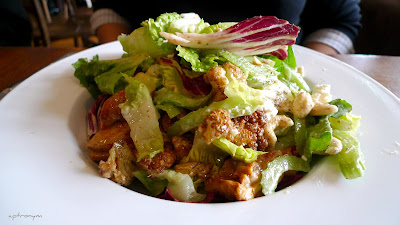 "Schulz smoked wagyu beef, Swiss cheese, sauerkraut, dijonaise and pickles on light rye ($14.00)" - the side salad was an unexpected but welcome addition, the vegetation fresh and crisp. The Schulz smoked beef is made by Schulz Smokehouse of Barossa Fine Foods, which states that it is "traditionally cured and cold smoked". It has a marked smoked taste, but when sliced this thinly, you definitely need a good serving of it in a sandwich like this.
The sauerkraut was pretty good, the amount of beef decent, but the overwhelming feeling for me was that I'd wished that it had been something other than cold. In this I am referring to the filling, which was almost fridge cold. It would have been nice to have been offered the option of having it lightly toasted, and I'm sure that I would have enjoyed it more for this. 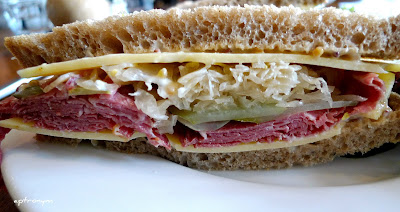 My sandwich aside (if I order it again I'll ask for it to be toasted), 2042 seems very much like an establishment that is happy for customers to pop in and simply hang out for as long as they like at any time of the day for a coffee, meal, to read one of the provided newspapers and to use their free wi-fi. The service was friendly and efficient, and it has a very much daytime feel to it, but it is open for dinner as well, with the dinner menu of entrees, mains, specials (though one could argue that if they if they are permanent "specials", they should probably just make their way into the "mains" section) and desserts also being available at lunch.

@chocolatesuze - Cold innards : not good for a Reuben!

I am going back. Lovely post, as usual AP. thanks

Thank you for your review, it was very helpfull. I'll make sure that all staff will ask customers if they like the sandwich toasted or untoasted.Comment on specials? Don't understant as we change our specials every week.
Thank you again.

Andrea - thank you for stopping by and your feedback. Re: the specials - I'd selected the menu page on your website a few times over a period of time and it had remained unchanged, so if it was a case of the website just not being up to date, thank you for the correction, apologies!