Valentine's Day
I am sure you foodies will all agree with me, there is no better way to seduce your better half than with amazing food. For the past few years, I have let professional chefs to produce the amazing food for seduction, but I this year I decided to do it all myself. I hunted down quality produce from the suppliers of top restaurants to see if I could reproduce the same seduction at home.
The entrée was inspired by our trip to Gordon Ramsay’s restaurant on Hospital Road in Chelsea. It is here that my better half found her favourite dish of all time – Ravioli of lobster, langoustine and salmon with lobster bisque. "Orgasmic" was the description at the time.
Well, despite all my efforts to tract down the proper recipe, three Borders stores and hours on Google later, I came up empty handed. I was given a pasta machine by my better half for Christmas so I was keen to make fresh pasta for the first course. Keeping the ravioli theme, I replaced the lobster and langoustine filling with prawns instead. A poor man’s version. I blitzed half of the prawns, some cream and a few basil leaves in the food processor to make the filling. The other half of the prawns were roughly chopped into chunks and added to the filling for texture. I made the pasta dough with flour, eggs and a dash of saffron infused water. 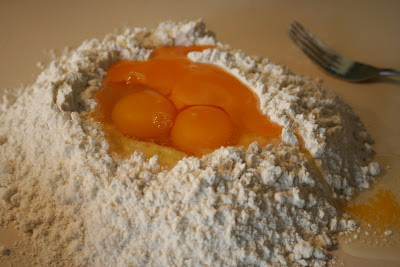 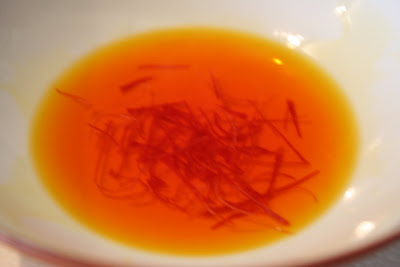 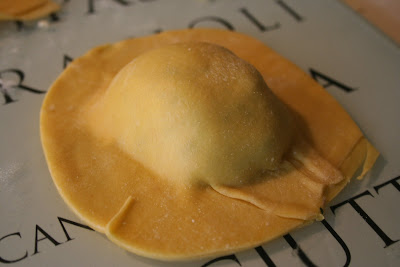 After resting it for 30 minutes, I used my new pasta machine to transform it into thin translucent pasta sheets. The end results came out better than I expected, especially for someone making pasta for the first time. 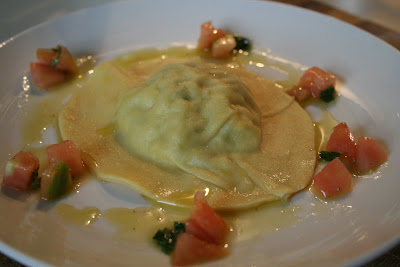 I made a simple vinegarette with balsamic vinegar and extra virgin olive oil, as well as some fresh diced tomatoes. The flavours actually worked really well with the acidity of fresh tomatoes offsetting the sweet flavours of the prawns.
For main, it had to be meat. I have always wanted to roast a big piece of meat. To source the best meat possible, I went to the Louis Vuitton of butchers, Victor Churchill in Woollahra. It is simply a meat lovers’ wonderland. Glorious cuts of different meats in shining fridges and butchers in their whites carving and preparing meats to order. There is a Berkel traditional flywheel meat slicer that has been carefully restored to its former glory and a large rotisserie with chickens and ducks spinning away. In a cool room to one side, large carcasses of meat are hung to dry age. One wall of the cool room is made of Himalayan salt bricks, which is pretty cool. After spending way too much time in the shop, what caught my eye was a magnificent rib of aged grain-fed beef. The man in white coat carefully carved out a large rib for me and reassured me that it will tastes great no matter how I did it.
The recipe I used came from Neil Perry’s Good Food. I am not a big fan of Neil Perry in general but this particular cookbook is fantastic. Mostly simple recipes that are achievable with lots of beautiful photos. 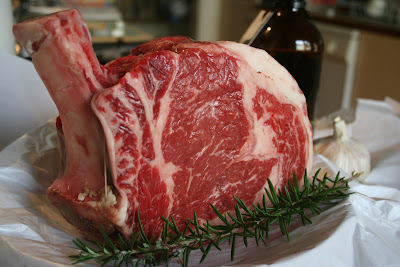 The beef was marinated in olive oil with garlic and sprigs of rosemary that I borrowed from my neighbour’s front yard. It was then slowed roasted in the oven at 70 degrees for 4 hours until it was between rare and medium rare. It was then rested, the bone removed and seared on a smoking hotplate for a nice crust. I served it with braised peas and Yorkshire pudding. 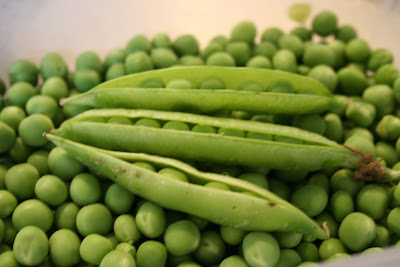 In keeping with the Valentine’s Day theme, I actually bought fresh peas and podded them myself! It was a labor of love. I braised them with anchovies and lots of butter and olive oil. 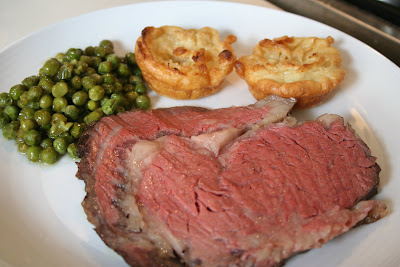 I may be biased, but the resulting beef was magnificent. It was tender and full of flavor. The gentle perfume of rosemary was subtle and lifted the dish to another level. The braised peas were sweet and wonderfully salty with anchovies. The Yorkshire pudding caused the smoke alarm to go off but it did not set any palate on fire. The oil wasn’t hot enough when the batter went in so it ended up more like a cake than anything else.
The side dish of ox-heart tomatos, fresh basil and bocconcini is my favourite salad. Not usually a massive tomato fan, there is something about the simple combination of salt, olive oil, basil, tomato and the creamy bocconcini that sets my tastebuds on fire. 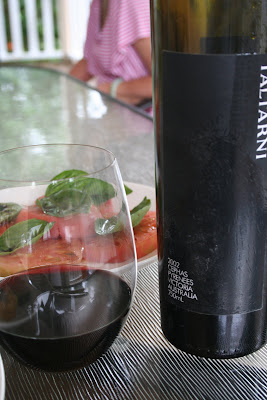 To accompany the meal, the chosen wine was the 2002 Taltarni Cephas, from the Pyrenees region in Victoria. It contains 70% shiraz and 30% cabernet  sauvignon, a very classic Australian blend. Even though it is 8 years old, the colour is still dark crimson with little signs of ageing. There was an explosion of dried fruit and slight mint on the nose. There are lots of dried fruit and some mocha and leather on the palate. The tannins are dry but not harsh. It certainly complements the beef very well.
The dessert was a Fig and Hazelnut Cake from Bill Granger’s Holiday cookbook. I love figs. For me, fig is the fruit of love. 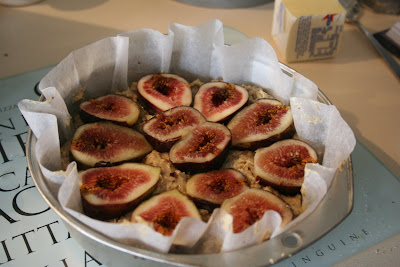 It is quite a simple cake but I  still managed to burn the top! 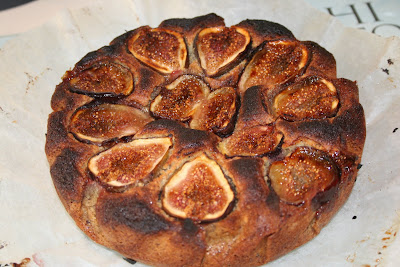 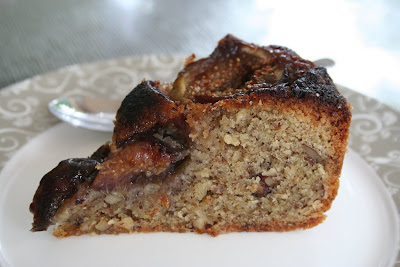 Luckily it didn’t detract from the sweet figs and hazelnut. I drizzled organic honey from Kangaroo Island on top of the cake before serving it with coffee. Despite the burnt top, the hazelnut and the sweet figs worked very well. My Nespresso coffee machine also came to the fore, producing almost café quality like cappuccino at the touch of a button. Loved it.
So did I recreate a restaurant quality meal?
The pasta was pretty good for a first time effort but certainly not restaurant quality. I would certainly make it again though. The cake was not quite a restaurant dessert but I would happily pay to have one in a café
Did it have the same effect as a restaurant meal on Valentine’s Day? No. It was BETTER. It was such a perfect day. Relaxing at home, no pressure, and the smells of wonderful aromaa filling the house the whole day.
It did take most of the day to cook all three dishes but isn’t that the whole point? Spending the day with your loved one doing the things that you love. The fact that we had such delicious food as a result is a bonus. Buying top quality produce certainly isn’t cheap and you would have paid more at a restaurant, but I doubt by very much. It was such a wonderful day that I wouldn’t hesitate to do it again. And we had enough leftovers to relive Valentine’s Day the following day!
[DY]
Posted by The Sydney Tarts at Friday, February 26, 2010

*swoon* When is my other half going to cook me a meal like this?!

What a beautiful labour of love...

I think the ravioli recipe you're looking for is in Gordon Ramsay's Passion for Flavour.