DY, newly working in Darlinghurst, was in search of a lunch companion for Tastevin.


It was, as they say, a no brainer of a decision for me to join him.
On that last occasion, between the two of us we had only ordered one amazing soup and a so-so Croque Monsieur. This time, I again wanted to only have something light, but as they say, the best intentions..... 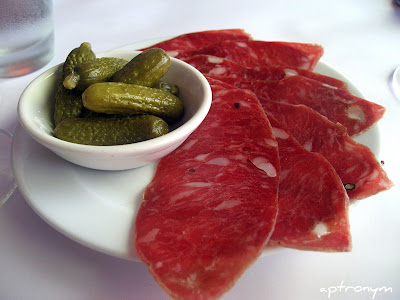 Saucisson artisinal de Jean Marc ($5)
The ever charming and friendly Alex was there, and told us that the saucisson was made in house, which sold us both.  Not as fatty as other cured meats, such as salamis, it was firm, pleasantly chewy, and a flavoursome way to whet our appetites for what followed. 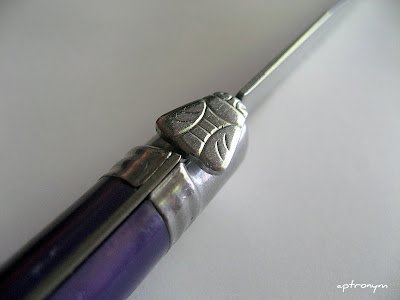 One of the things that sets Tastevin apart is their use of beautiful Laguiole knives, as characterised by the distinctive Laguiole bee. 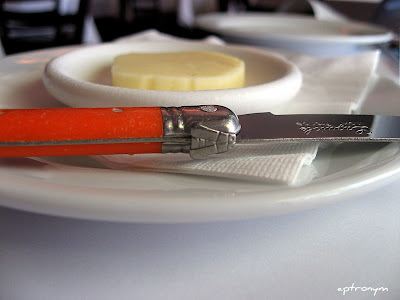 The name of the town of Laguiole derives from the word "La Gleisola", meaning "the little church" - the small secondary church which dominates the town, and which became its main church in XVIth century. 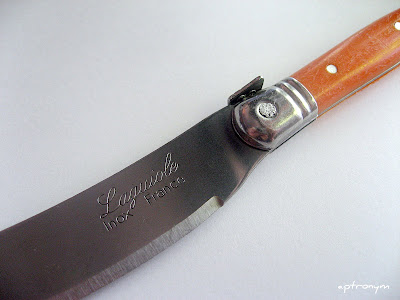 DY is keen about duck. Very keen, and this was what he ordered. 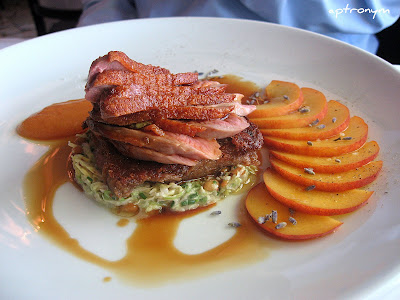 Duo of duck on Chinese cabbage with pine nuts, peach and lavender jus ($29) 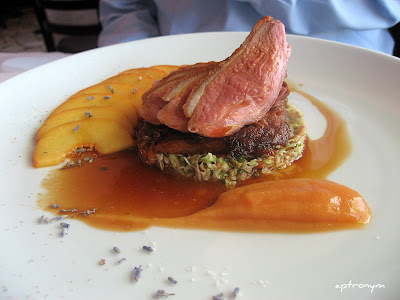 A beautifully presented dish, DY found this a great modern interpretation of the classic duck, cabbage and fruit combination. The duck was wonderfully cooked; rare but not too rare, tender and gamey in flavour.  The cabbage salad, consisting of finely shredded cabbage, pinenuts and a mustard dressing, was delicious. Having taken a bit of the cabbage salad, I can say that it rocked, and that I wanted all of it.

He thinks that perhaps Tastevin should consider a less complex cheaper version of this duck for weekday lunches, due to the immense competition in this area for the weekday lunch market. 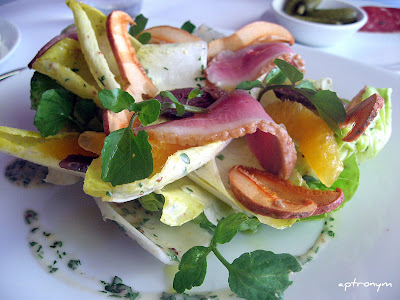 Salad Landaise -
confit duck gizzards, cured duck breast and pine mushrooms
I had intended to have something light, and so I ordered the special of the day, the Salad Landaise.
Looking back at this photo, I realise that I did not properly appreciate all the beautiful details about my lunch at the time.  The colour and texture contrasts, the beautiful pinkness of the duck, so thinly and uniformly sliced. It is the most elegant looking salad I have eaten in a very long time, and the taste matched its aesthetics. This is a salad worth having.  It was of sufficient size to suit as a lunch for me, but I got tempted.....
This was my temptation. 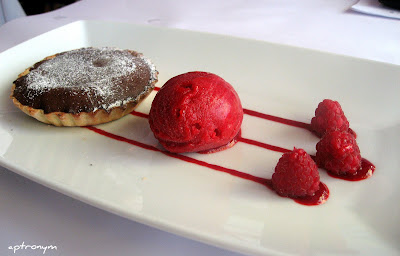 "A la minute" dark chocolate tarte with raspberry sorbet ($13)
Another classical taste combination of chocolate and raspberries, the chocolate tart had that freshly made taste, and was not too sweet, allowing the natural flavours of the chocolate to shine. The sorbet was smooth and rich, and the combination, worked, as it does.
Sometimes timeless things done well are best, aren't they?
At the end of our meal, we were still the only ones there, and we had a short chat to Alex and the other Tastevin chefs (the Head Chef was busy somewhere). One of them gave Dean a slice of the confit duck that appeared in my Salad Landaise, and Alex showed us an entire uncut saucisson. I went on a bit about the cabbage salad, of course.
It's that kind of place, Tastevin. Welcoming, friendly and serving pretty damn good food. They deserve more lunchtime patronage, and for the life of me I cannot figure out why there weren't more people there.  Just a few doors down the road there were people paying around $20 for a medium pizza.
I had meant to return to Tastevin earlier than this.  As I type these words, DY is having dinner there....he had the saucisson again, and is eating a Trio of Lamb. Me? Actually, I was meant to go there last week for dinner, but circumstances meant that the meal had to be postponed, and I can't wait.
[AP]
Posted by The Sydney Tarts at Sunday, February 07, 2010

Simon - it is definitely worth a place on your wish list!

Looks really delicious! Thanks for the review. Another one to put on the list.