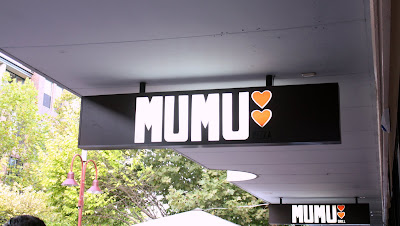 Some of the best things in life start with the letter B.  Bars, Bugatti, botox and Bono come to mind. So when the invitation came to attend a Beer Tasting Dinner, all other appointments were immediately cancelled. 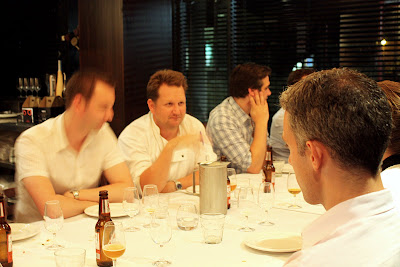 Head chef Craig Macindoe of MUMU Grill in Crows Nest is a man with a vision and a mission. A great believer in sustainability and caring for the environment, MUMU is the only steakhouse in town that serves only grass-fed beef. Compared to grain-fed beef, grass-fed beef leaves a much smaller carbon footprint and is more sustainable. 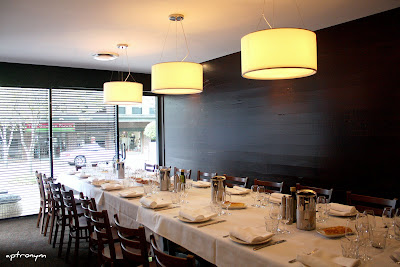 Craig held a dinner for a group of social media friends to be his guests for the introduction of his new private dining room, and to announce a new monthly beer dinner. The new private room is a lovely room next to the main restaurant with a singular long rectangular table that can seat 20 comfortably. 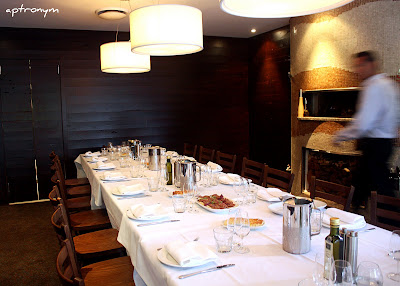 The prominent feature of this room is a massive woodfired oven to the one side of the room that gives the room a nice warm feel without the direct heat, but which wasn't generating so much heat as to make this balmy Summer's evening uncomfortable.  On this night, the oven did duty as the finishing place of some of the dishes that we ate. 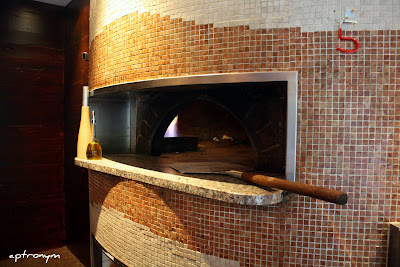 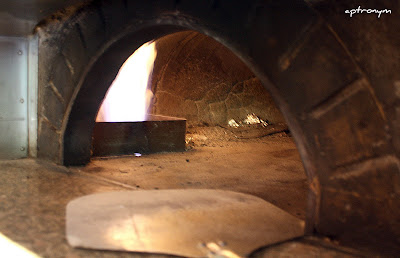 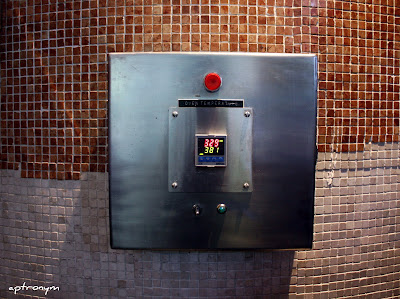 The other star of the evening was the beer, with different courses matched to a different beer. Beer Snobs provided the expertise in beer and educated the room with the proper way of tasting beer.

Just like wine, the beer is served in a wine glass. Beer tasting the BeerSnob way, you carefully pour the beer into appropriate glassware in two stages to ensure a correct head, inspect the colour and clarity (plus "carbonation", the third C), take three big sniffs to identify the various bouquets, and only then can you can finally take a sip and notice the complex flavours that each beer delivers.

The best thing about tasting beer is that unlike wine, an important aspect of the flavour profile of beer is bitterness, which you can only taste at the back of the tongue. That means to taste the full flavour of the beer, you have to swallow. No spitting allowed! 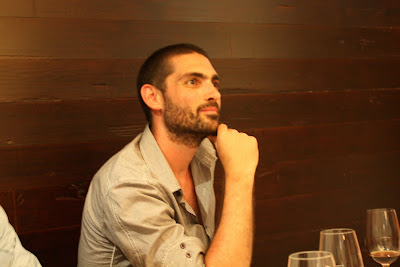 Like Craig, Dan and Graham from Beer Snobs are also on a mission. They started the business only last year after deciding that people were not drinking enough good boutique beer, and they are out to educate as many people as they can about the emerging phenomenon of Aussie boutique beers. Quality, not quantity.

Both Dan and Craig are knowledgable, approachable and entertaining. Very unsnob-like, really. Their mentra is very similar to that of the late Len Evans (the Godfather of Australian wine industry) – "you have only so many bottles in your life, never drink a bad one".
We started with Beef Tartare on cruets served with Moo Brew Hefeweizen. The tartare had a nice spicy flavour to it from the Spanish onions and other secret herbs. The Hefeweizen was a nice refreshing German style wheat beer that prepared the palate for the feast that was to come. 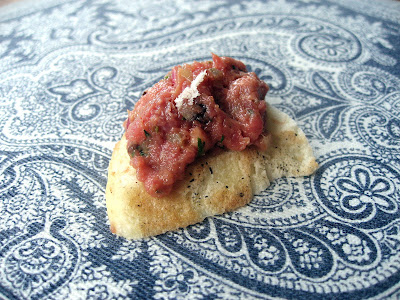 Once seated, we started with what Craig called an expensive ham sandwich. Slices of tender, melt in your mouth Jamon Serrano (aged 18 months) with bread and slices of large ox heart tomato, straight from the backyard of his vegetable supplier. A ham sandwich I could live with everyday [Dining Companion sidebar - me too! And some Catalan pa amb tomàquet perhaps....]. 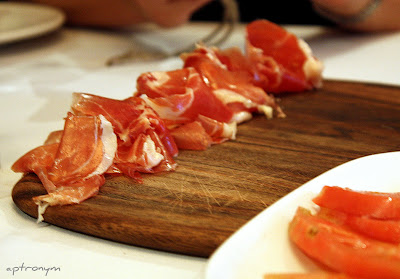 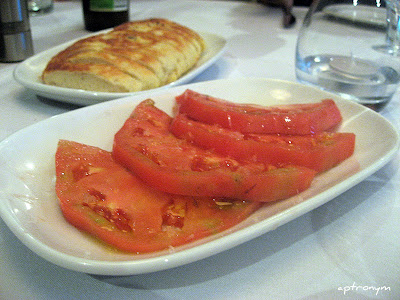 The matching beer was a Murray's Pilsner. It was a great pilsner style with plenty of hoppy flavours on the nose and palate. Great beer to go with a ham sandwich. 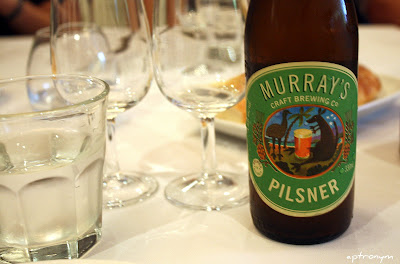 Freshly shucked oysters were next, served simply with wedges of lime. Craig had included BBQ sauce on the side for dipping for those who do  not like the taste of oyster. Who are these strange people?! We were meant to have a Pacific and a Sydney Rock oyster each so we could compare the two, but I got two Sydney Rock ones. I am not complaining, as the oysters were fantastically creamy and full of salty brininess. 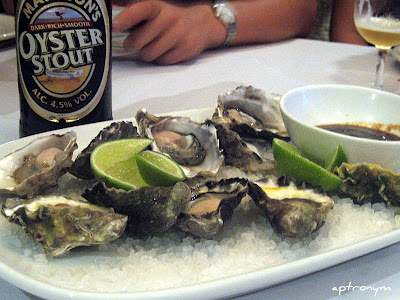 These were matched with Oyster Stout. Although it has "oyster" in its name, it does not contain any oysters. It is so named as a reminder that stout and oysters classically go together. In times long past, fisherman use to drink a lot of stout and eat lots of oysters, as they were both relatively cheap. 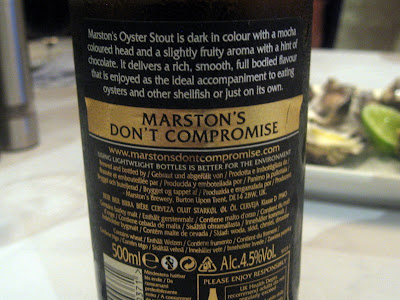 They go fantastically well together. The creaminess of the stout matches the creaminess of the oyster. I am not a big stout fan as it is usually quite heavy – meal in a glass as some people would describe it. This particular stout however, has quite a clean flavour that does not make you feel that you have just drunk a glass of blended hamburger. It has the typical chocolate aroma with a lovely creaminess, and is full of flavour.
Next came pork. 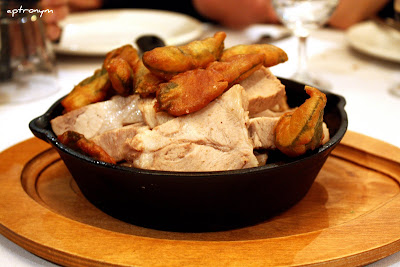 The Slow Roasted Bangalow Pork was a whole shoulder marinated in beer and sage and cooked at 85 degrees for 15 hours, then finished off in the woodfired oven in the room. The pork was amazingly tender and flavoursome. It was served with cassoulet style cannellini beans and bacon as well as tempura sage leaves. The beans didn’t blow me away but my dining companion thought they were the best thing ever! [Dining companion sidebar - I really enjoyed the sauce with the beans, especially when soaked up with some bread, and the tempura sage leaves were moreish and struck me as great (beer) snack food] 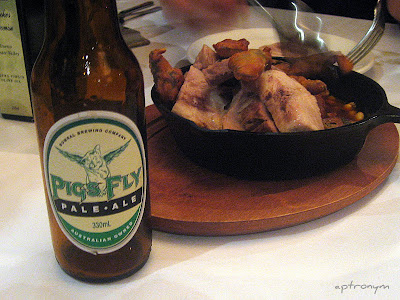 The pork was matched with Pigs Fly Pale Ale from Bowral. It has the citrus nose from the aromatic hops and the slightly honeyed flavour you associate with a good pale ale. It is not the best pale ale I’ve had (Little Creatures or Murray Nirvara springs to mind), but its lack in intensity actually went very well with the pork by not overpowering the dish. 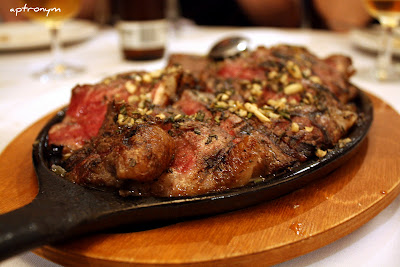 Angus Pure T-bone Tagliata with Rosemary and Garlic was the star of the night. Angus Pure is a new product that ironically came about after the hype McDonalds created with its Angus beef burgers. It is 100% Angus beef that is pasture fed, hormone and antibiotic free.

The beef was cooked on rock salt. According to Craig, this is the only way to eat a steak. A bold statement, but after tasting it, I would not disagree. The steak had a wonderful flavour with the saltiness from the rock salt, rosemary and garlic. The texture of the beef was amazing. Served medium rare, it was extremely tender yet it had a lovely bite and texture.
The best steak I ever had? Quite possibly. I think it was served with potatoes or something but I didn’t quite notice. [Dining Companion sidebar - I did enjoy the steak a lot but oddly, I didn't find it had the same impact on me as the steak I had in the steak sandwich I ate on a previous visit to MUMU and yes, it was served with delicious Duck Fat Potatoes] 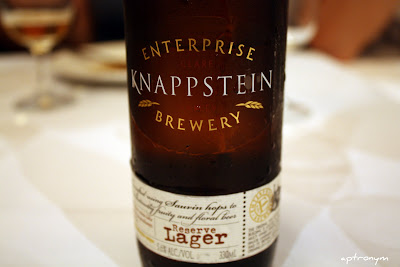 This was served with Knappstein Reserve Lager from SA.  Being a beer brewed by a winemaker, it’s not surprising that there are lots of similarities. The lager has a complex nose with lots of citrus and tropical fruits. It is medium strength but full of flavour. With its full robust flavour, it was quite an intresting companion to the beef. Even prior to this dinner this was one of my favourite beers. 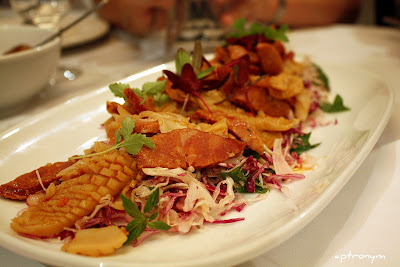 The last savoury dish was Braised Cuttlefish with Chorizo. It was a bit of an odd choice to be the last savoury dish but the flavours worked quite well. The fresh herbs wonderfully balanced the dark, caramelised, smokey flavours of the chorizo and cuttlefish. I do think it will work much better if presented earlier [Me again - I would also agree that this dish would probably have worked best at an earlier point in the meal. Perhaps before the pork.]. 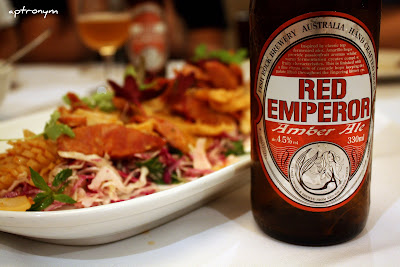 The beer to match this dish was the Red Emperor Amber Ale from Mittagong. A nice golden coloured ale created specifically for seafood. As a stand alone beer, it’s not a great beer. A little short on flavour, but it does have a very clean palate that goes quite well with seafood.

To finish off, a Sour Cherry Chocolate Tart with Hazelnut Sorbet was matched with Moo Brew Dark Ale. 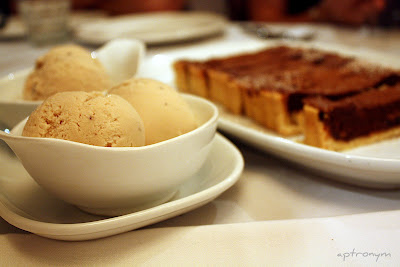 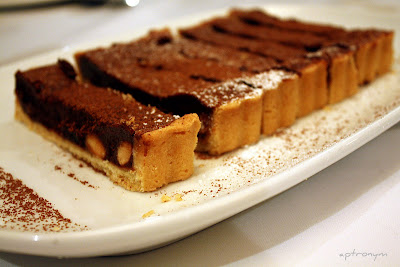 This was, surprisingly, the best match of the night. The chocolate tart was dusted with cocca and a sprinkle of chilli powder which added a nice subtle heat and intensity to the chocolate. My Dining Companion polished off two slices happily. 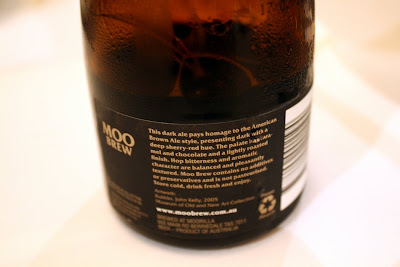 The dark ale had a lovely caramelised chocolate flavour that matched the tart perfectly. I find that dark ale goes with chocolate dessert much better than wine, as it can match the flavours of the chocolate without being overly sweet.
Naturally, we couldn't finish this post without a few photos of watches that were present that evening. These first two were those worn by myself and the Dining Companion on the evening. 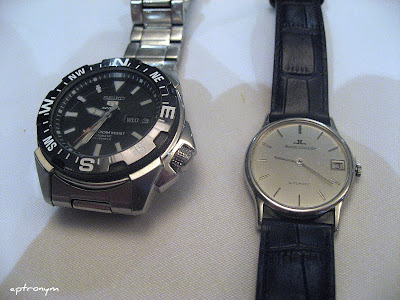 The next two watches were from two of our fellow guests who were sitting opposite us. 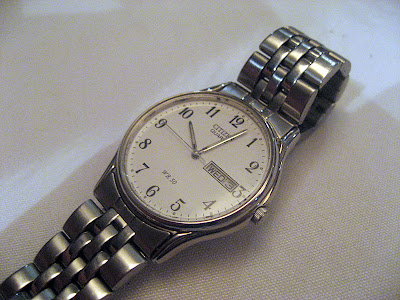 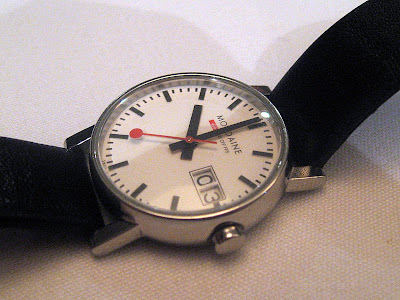 It was the most enjoyable evening, with Craig’s generosity warmly felt. His heavy involvement in social media, such as twitter and facebook, brings him closer to his diner and help promote his vision. He is a wonderful storyteller not afraid to pass on his knowledge, and his passion shines through. The same applies to Dan and Graham, whose enthusiasm is simply infectious. A big thanks to Criag, Dan and Graham from the both of us for the invitation and based on that night's dinner, it will be a resounding success. 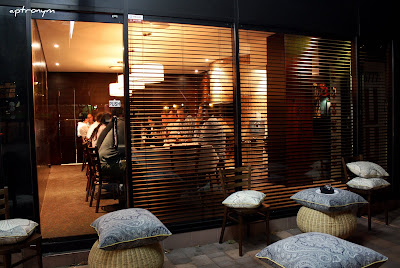 [Text : DY. Photos and sidebars by last minute replacement AP, who likes things beginning with 'b' such as books, beef and Bloom County. JH - I'm sorry that you couldn't attend and hope that you're enjoying this vicariously!]
Posted by The Sydney Tarts at Tuesday, February 09, 2010

that steak was great. thanks for putting my citizen quartz watch photo up too hehe :-) i was wondering when you were going to post this review. nice recap :-)

Simon - Now you'll have to buy another watch so that there'll be more photos to be taken! LOL.