Ah ramen, how we love thee.
We love your progenitors in China, we love the Shin-Yokohama Ramen Museum, and though we have not yet made it to the Momofuku Ando Instant Ramen Museum, we shall one day visit, clutching The Ramen King and I : How the Inventor of Instant Noodles Fixed My Love Life.
A number of the Tarts love the ramen at Gumshara, though our preferences are different. I myself like the Tonkotsu (aka "the Chronic"), which hails from Kyūshū . Others prefer the Chasu (with extra egg).  Preferences aside, we are in agreement about the addictive taste of Chef Mori's famous award winning ramen.
On 5 Feb 2010 an email appeared in my in-box from Mori, teling me that his Sensei (Master), Mr Akasako of the Muteppou ramen restaurants (Kyoto, Osaka and Nara), had finally found the time to come to Australia and that he would be happy to meet with me.
I was a little excited.
Okay, maybe a lot.
I wasn't the only one though, and after a flurry of emails back and forth, we hoped that five of us would be able to be able to visit Gumshara to pay our respects to Mr Akasako, a man who has devoted two decades to perfecting ramen, of which eleven years has been devoted to his own business. Unfortunately, due to distance and related issues, only two of us made it there in the end.
Finally, the day had arrived. It was time. 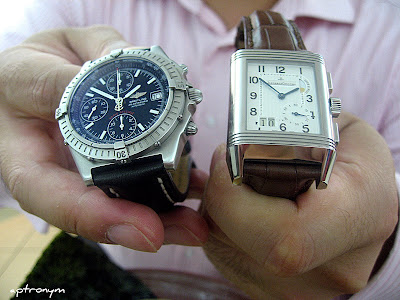 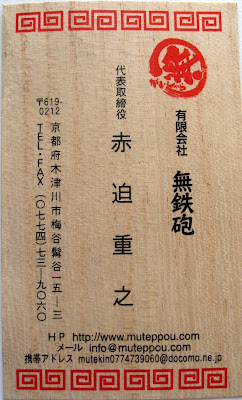 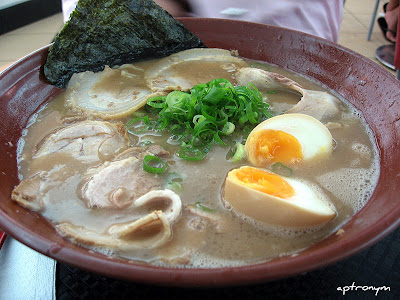 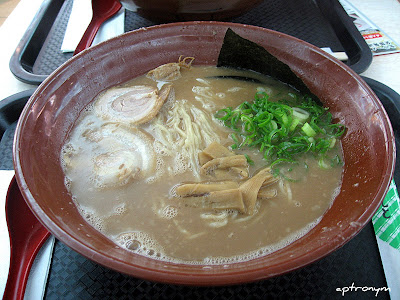 Mr Akasako brought along some of his brochures to give us. The pamphlet on the left opens up to show the dishes he serves at Muteppou, the flier on the right is for his latest venture - a ramen shop in Nara specialising in Tsukemen (つけ麺). 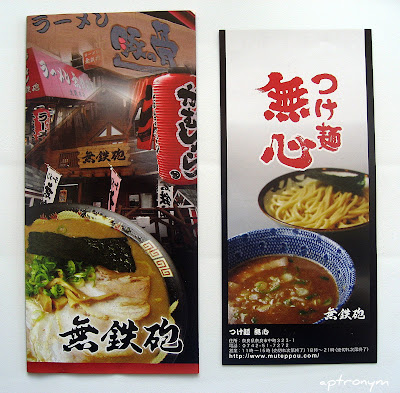 Tsukemen is a style of ramen in which the noodles are served separate from (but to be dipped into), the soup. The noodles are best served cold, though I've had some with the noodles at room temperature, whilst the soup is usually hot and contains the usual ingredients such as chasu, leeks, bamboo shoots. I've eaten tsukemen where the soup has been like a concentrated version of what it would be if the ramen was served in the soup.
As you can see below, the range of ramen available at Muteppou is a very classic selection, and one mirrored in Gumshara's menu.  The item with the question mark is the day's 'mystery ramen', which is a drawn from a limited number of possibilities. 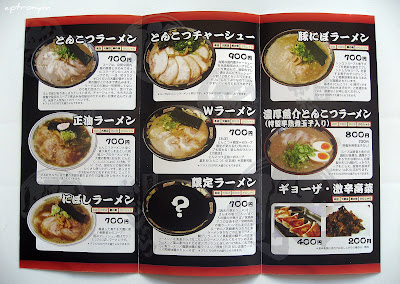 Another fold of the pamphlet shows the locations of the various branches of Muteppou. The panel on the right indicates a takeaway option which can feed four people, with each ramen component in separate containers. 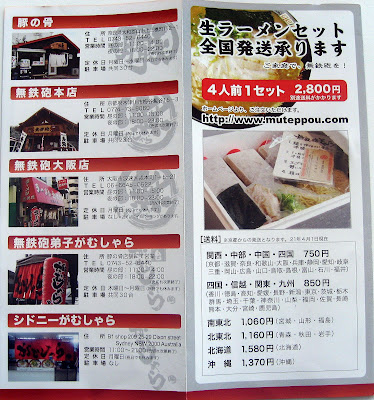 If we look at the bottom of the page, we find that Mr Akasako includes Gumshara. 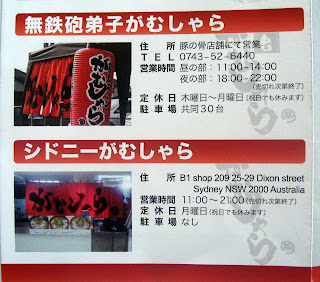 The menu of the new tsukemen outlet in Nara. 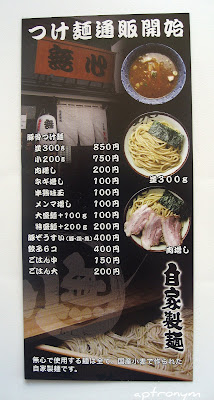 Ramen Sensei Mr Akasako speaks only a little English, so it was left to Mori to be the interpreter as I told him about his protégé's Sydney fame, and how much his ramen is loved. He seemed surprised but pleased to hear that there is ramen passion in Australia.
They have been discussing ramen a lot during his Sensei's visit, and in particular a ramen trend that seems to be taking off, though at the moment I believe that it is still restricted to Tokyo. As there doesn't yet seem to be an English term for this new taste trend, I will call them "flavour balls".
When he started describing them to me, I couldn't quite get my head around it, but when they appeared, made by Sensei Akasako especially for us(!), Mori explained, and it all fell into place. 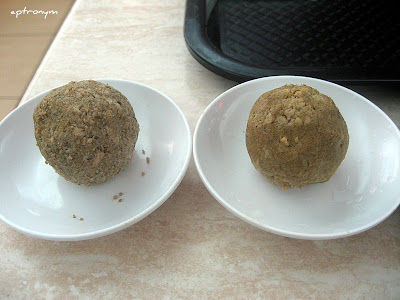 The one on the left is a fish flavoured one and the one on the right, curry. These are not flavours which are are appearing in Tokyo at the moment, those are more along the lines of chilli balls. As Mori told us, these were world firsts.
The idea of these "flavour balls" is to add some interest and variety to a bowl of ramen. You consume some of your (in this case) tonkotsu based ramen, and then pop your flavour ball into the soup. 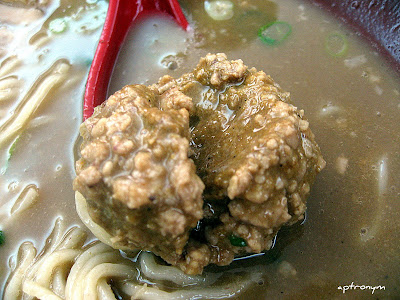 The ball is broken up and combined into the soup.  I had the curry ball above. A combination of pork mince, curry powder and other secret ingredients, once this was added the ramen completely changed and became a light curry flavour. The underlying richness and depth of the soup was still there, but with this new added curry layer turning it into a completely different dish.
I have to confess that it was a lot of fun, like getting two bowls of ramen in one.  Onomatopia had the fish one, from which I tried a mouthful, and like mine, the whole nature of his ramen was completely altered.  The components of the fish flavour ball were elusive, and the only thing that we managed to ascertain was the use of fish powder; what powder we did not find out.
At any rate, we finished our ramen. 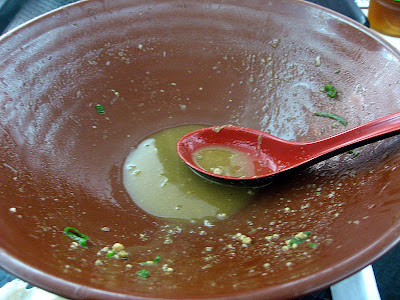 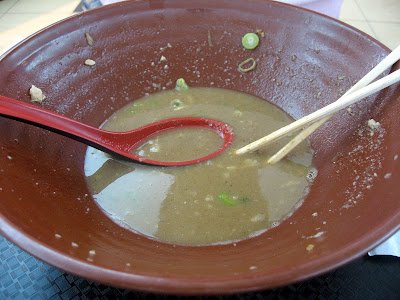 Onomatopia's bowl
The best is saved for last, of course. Here are Gumshara's Chef Mori and his Sensei, an easygoing humble man with a great love of ramen and a desire, along with Mori, to continue to work and develop their dishes.

Gumshara will introduce these flavour balls soon, so keep an eye out for them when you next visit Gumshara for your fix. 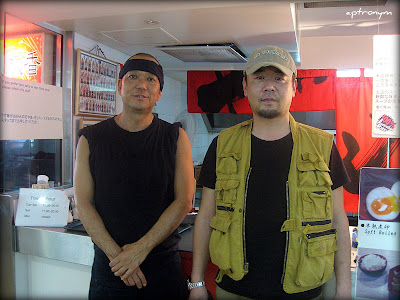 Ooh, it's like a bath bomb in food form. Brilliant idea! Can't believe I wasn't taken to the place on my last visit back :-(

That is sooo AWESOME! How you met Chef Mori's Sensei. The Pork spareribs at Gumshara is my favourite dish of all time and it is amazing!

I heart Gumshara. It is the best ramen in Sydney or even in Australia.