We met in Kindergarten, HG and I. The shortest two in the class, we are immortalised at opposite ends of the front row in the class photo. The photos from following years showed a similarly tedious repetitive pattern, the only variation being who was at the left and right extremities.
In the intervening decades, we've mostly been in different cities, sometimes different countries, and there were years where we barely kept in touch, but the friendship has always been there.
And so it was, with HG (now back in Canberra) recently up for a few days for a work related conference, that we managed to fit in a meal and some time not for reminiscing, but for the simple act of catching up.
Unfortunately Fix St James were not open (it being a Monday), and so it was that we eventually found ourselves at Prime.
Have you ever found yourself at a steakhouse or any restaurant which prides itself on its steak and felt guilt about not ordering it? Or at least torn up about Beef vs. The Rest?
Yes I have felt guilt about such a dilemma, but in this case I didn't, and well, I went for one of my favourite meats, duck. 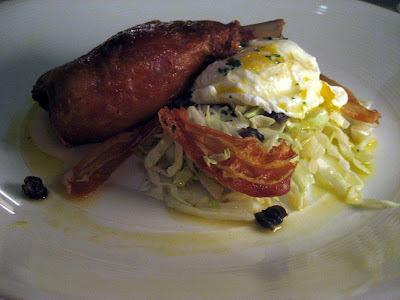 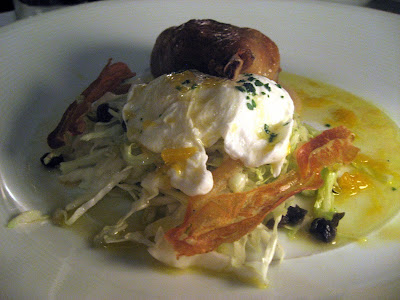 A very enjoyable dish, the flesh tender (but not quite falling-off-the-bone-tender), I also found it interesting, as the combination of the egg (poached perfectly) and the crispy pancetta reminded me of breakfast. It struck me that this would actually work very well as a weekend brunch/ lunch dish because of this.
I love cabbage, and am always happy to see it in a dish. It worked well with the duck, and with the egg yolk smothered through it in conjunction with the flavours of the puree and subtle taste of the vinaigrette, the cabbage was just pure comfort food.
Naturally, HG went for the steak! 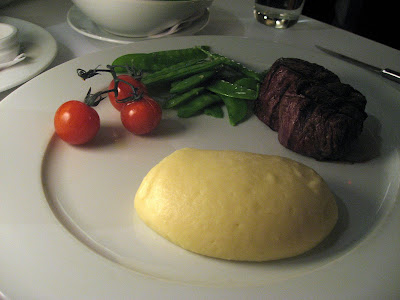 Prime Fillet (250g) Yearling. 100 - 120 days Grainfed, Angust-Hereford Cross, New England ($46)
She ordered it 'rare' (usually chooses 'medium rare'), and beautifully rare it was. She was extremely pleased with the quality of her steak, commenting that it was the best that she'd had for a very long time. From the mouthful I had, it was full of flavour (one day I will do a taste test of grass vs grain fed in the one sitting!) and tender. If her steak had been any bigger I may well have taken an extra bite or two of it... 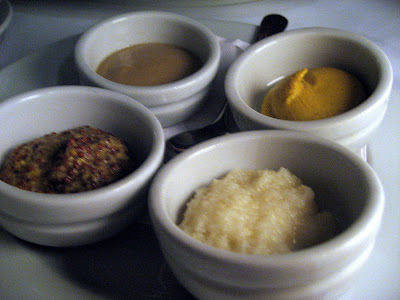 HG enjoyed her steak so much that against habit, she did not use any of the mustards and horseradish that she'd ordered to accompany her meat, as she did not want anything to detract from the taste of the beef. Praise indeed. 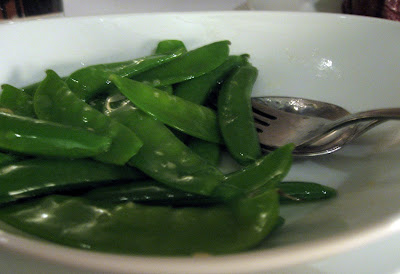 Yes, one must order a side of "greens"!
As we had not ordered entrees, desserts were in order! 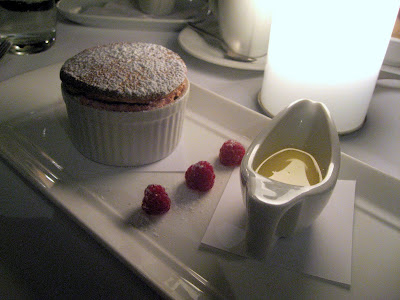 Raspberry Soufflé with Crème Anglaise ($16.50)
My choice was the soufflé, which came with a twenty minute cooking time warning on the menu. The Crème Anglaise combination is a classic one, and in this case, both parts of the dessert were as they should be, with the sides of the soufflé a soft pink, hinting at its taste.
The soufflé's raspberry taste was quite subtle. Having a rather less than subtle palate, whose sensitivity has no doubt been dented by too many years of chilli abuse, I would have been happy with a more marked raspberry taste, but the three fresh berries adequately compensated for this, as well as being a nice visual touch. 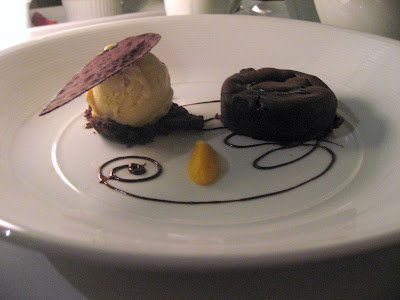 Chocolate Fondant with Bitter Orange Marmalade & Peanut Butter Ice Cream ($16.50)
The second dessert ordered was the Chocolate Fondant. It was HG's first foray into Fondant World, and I am afraid that she may Succumbed to The Lure of the Molten Chocolate Innards.  With so little of it on the plate, I didn't try the Bitter Orange Marmalade but was assured that it was most delightful indeed, and a good (classic) citrus counterpoint to the chocolate.  I did manage to try some of the ice cream, and if you're a peanut butter junkie, it will probably make you happy. 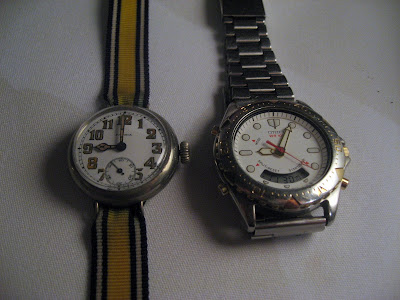 Oh and the watches? I was wearing my Patria, and she had on a Citizen WR 100.

Prime is my favourite place for steak. Their chateaubriand is to die for.

Oh I haven't tried the chateaubriand. That will have to be next time!