This long love affair with IWC began with an ad. Yes, an ad. For all you cynics out there who doesn’t believe advertising works, well… it does. This particular ad was a still image of the IWC Portuguese Chrono, show on the screen in the back of the Cathay Pacific flights I took to Hong Kong and back, sometime during 2003. The ad was shown during take off and landing, a time when you have absolutely no choice but to stare at the screen in front of you. (The other choice was to close eyes, cross fingers and pray for safe take off/landing).

After staring at that watch for what must have been a total of close to an hour, I fell in love with it. I fell in love with its simplicity in design, its elegance and (for the time) the large diameter of the watch face (which consequently wore much larger still as it has minimal bezel). I was still a newbie in the world of WIS, and had only begun to learn about these high end watches outside Omega, Tag and Rolex. At the time I had the Omega Seamaster GMT strapped to my wrist (my first expensive Swiss watch). 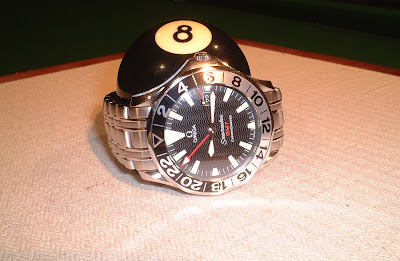 I didn’t think I could afford it though, the price of the watch being close to 9 or 10k Aussie. That was a lot of money back then (come to think of it… still is…) and I had saved up a fairly long time to get that Omega, and it retailed for less than half the price of the IWC. But as I continued to save, and the Aussie dollar slowly strengthening, it was only a matter of time before IWC decided to do a price adjustment and adjust downward the RRP of the watch. And down they did in 2004. I think the RRP came down to a more manageable 8k-something, and by that time I’d already established strong ties with the watch world (don’t ask me how…) I managed to get a pretty darn good price for the IW3714-01, with an additional folding clasp. 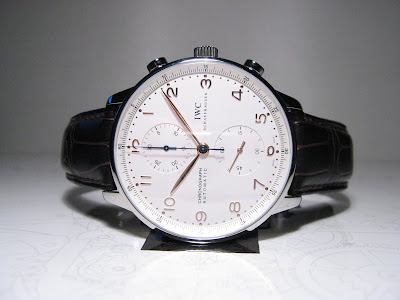 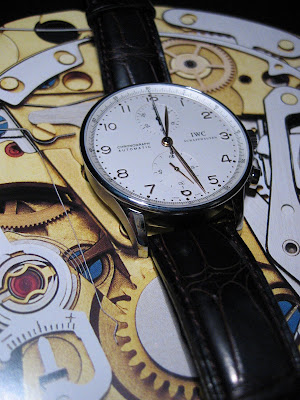 The feeling I had when I strapped the watch to my wrist was akin to getting full marks in maths or that first kiss with a girl. I was ecstatic; over the moon! I couldn’t be happier. It was a LOT of money but I felt it was money well spent. Now I was part of the group that knew there were more out there than Rolex, and the proof was on my wrist. It was also about this time that I discovered the art of changing straps and soon enough, I added to my strap repertoire, a brand new light brown strap and a 2nd hand antique brown strap, both for the IWC. 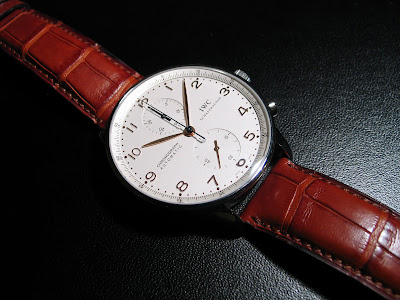 The watch being powered by a highly modified Valjoux 7750 didn’t bother me one bit. I loved the wobble whenever I shake the watch just right, and it was doing something ridiculous like +1 sec/day on the Witchi ( a timing machine as used by my watchmaker) and I had worked out a way to ‘store’ the watch overnight that would result in an average of 0sec/day, day in, day out. I had no complaints and the watch drew much compliments. It was a watch that I’d said I’d never sell. Even when our favourite 2nd hand watch retailer made a casual offer for that watch, I’d replied to him saying that I’m never selling this watch. It’s a keeper. Well… as we’ve all learnt- never say never, right?

I am usually in the "cynic's brigade" when it comes to advertising and in fact when it comes to the effect (or lack thereof) of ads on me, but I do have to acknowledge that similarly to you, there were two watch brand ads that sucked me in at the "right" time (when I was around 19-20) - Blancpain and Breguet.....