So I got a call from RE asking me if as a thank you for helping when I actually didn’t realise that I had, she could take me out to lunch.  But you really don’t need to, I naturally replied. Nonono, she insisted, lunch for you!

I had been actually craving some Soupe a l'oignon and Croque Monsieur (in the one meal) for some time, and my attempt at Weight Loss Through Healthier Eating was, after it’s initial buzz, getting a bit old. I wanted some cheese in some manner or form, and I wanted it NOW!

I had browsed Tastevin’s website numerous times but like so many places, just hadn’t made it there. There was also the minor Issue of Bunnies. They didn’t have bunnies on the menu on all the occasions I looked, but I had a fear that at some point they would. Sure, it’s all just in my head, but I have never been able to think about the poor wee things as food, especially after one of my sisters had a pet dwarf grey called Niki who had way too much personality for one small rabbit (including peeing on the laps of people she didn’t like).

I did a quick check of the website and it seemed to be bunny free. At least temporarily, so I went to meet up with RE.

It was during that unexpectedly hot period at the beginning of June, when it felt more like Spring than Winter. The crowds were outside in force dining on Victoria St, but when we headed up the stairs, there was no-one there, so we wondered whether in fact they were open, though they were clearly meant to be.

Happily, they were, and even more happily, I recognised the person coming over to greet us. I don’t get out and about dining as much as I would like to, but despite not having seen me for really quite a while, I was astonished that owner Natasha, who used to be at Bambini Trust, actually remembered me! I definitely remembered her from my various visits to Bambini over the years, and was even more pleased to find out that Tastevin was her and her husband Alex’s.

Alas my soup plans went to pieces, as it seems that it wasn’t ready yet, but Natasha offered us the option of a Cauliflower Soup w Boudin Noir instead. Well obviously that sounded like a good option so I ordered the soup plus the Croque Monsieur w Green Salad and Dijon Vinaigrette ($14) and the evidently not hungry RE just ordered the soup and some of the house bread with olive oil and French butter.
We enjoyed having the dining area to ourselves and being seated by the window. It is a welcoming room, full of natural light in the day time, and providing some peace from the bustling crowds below.

And so to the soup. 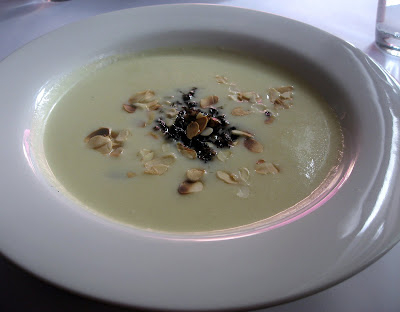 We were actually happy that serendipity lead us to this soup rather than what we had been hoping for. It was quite subtle in taste, no overwhelming cauliflower, and one of those dishes where the more you have of it, the more pleasure you seem to derive from it, and the more you want. The Boudin Noir and toasted almonds on the top provided some nice crunch and body to it.

RE, who basically ate her way through a rather large bread basket despite having stated that she was not hungry, became enraptured by the accompanying olive oil.

Now, what I had been hanging out for, my Croque Monsieur. 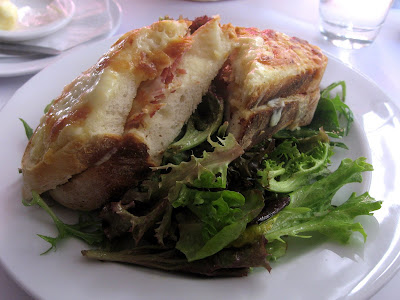 The Big Question –béchamel or no béchamel? I must confess that I prefer mine with, but obviously I’m not going to reject a CM on account of it not having any, if the rest of it is tasty. As you can tell, this one was sans béchamel.

The accompanying salad was generously sized and simple but satisfying but I don’t know...am I being too fussy? I kind of like my CMs to be slightly gooey from the cheese, so that I have to eat it with a knife and fork. It’s not that this was a bad sandwich, because it wasn’t, but it just didn’t quite hit the spot as I had hoped that it would.....

Would I go back? Yes, but not for the CM, but to try something else. The restaurant itself, the moreishness of the soup, and it being Natasha’s restaurant are enough for me to want to support it. I’ve subsequently read some reviews about it and will probably order quite differently on my next visit. [AP]
Posted by The Sydney Tarts at Saturday, June 20, 2009