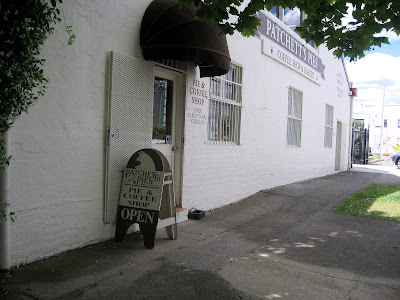 Until I read fooderati's post on Patchett's Pies, I had no idea that Patchett's had a retail outlet, albeit attached to their factory. Once I read her review, I knew that I had to visit, but it took me a few months before I got around to it.
Once there, the food deck was hit running..... 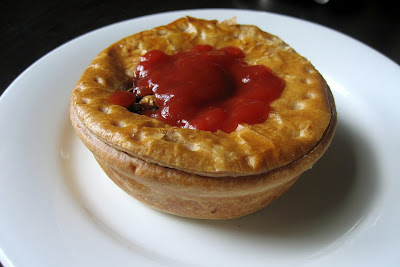 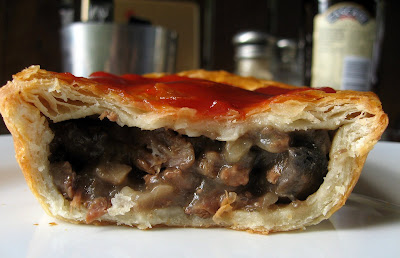 A flaky pastry encasing chunks of beef and onion, the only way to eat this tasty pie is with your hands and, of course, the mandatory tomato sauce, which is sold separately in little packets. It occurred to me afterwards that it would have been a nice touch to have had bottles of it available on the tables for customers to slather onto their pies as they desire.  This is a pie place after all! 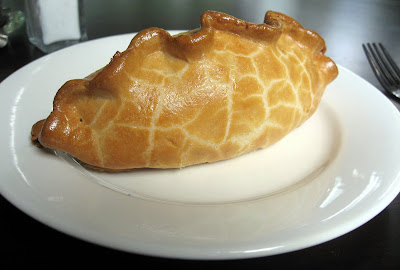 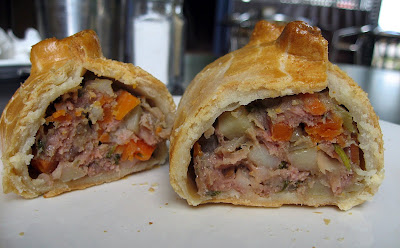 Now let's take a closer look at the filling..... 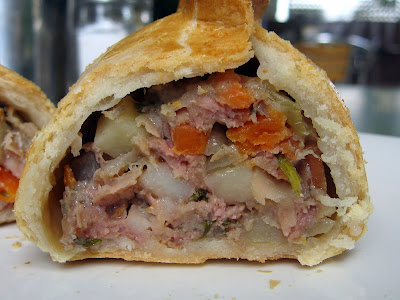 The pastie turned out to be a slight disappointment compared to the Beef & Mushroom Pie. I found the pastry a little "tough", as it were, and the filling, though good in terms of the actual contents, erred a little on the salty side for me.
Cornish Pasties are taken seriously. So seriously in fact that in 2002 the Cornish Pasty Association was established by a group of more than 40 pasty makers based in Cornwall. The Association exists to protect the quality and the reputation of the Cornish pasty. If you want to read more about the origins of this pasty, which apparently dates back to as early as 1300, and about the Association, they have a website.
In 2002 the Cornish Pasty Association submitted an application to the UK government's Department for Environment, Food and Rural Affairs (DEFRA) to obtain Protected Geographical Indication (PGI) status for the Cornish pasty. DEFRA has confirmed that it is backing the application and will be sending it to the European Commission for final approval. If PGI status is granted to the Cornish pasty (the same status that has been granted to Champagne, Parma Ham, Stilton Cheese etc) it would mean only pasty makers based in Cornwall who make in a traditional manner and follow a traditional recipe will be able to label their products as Cornish pasties. More about the PGI application can be found here.
Another much loved pie like comestible originating in the Old Dart is the Pork Pie, which is constituted of roughly chopped pork and pork jelly sealed in a hot water crust pastry, and normally eaten cold. 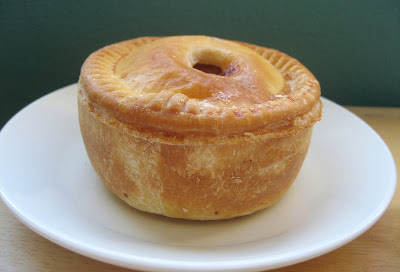 In Yorkshire, a Pork Pie is called a "growler", and of course it is also the Cockney rhyming slang for a lie, or a "porky". 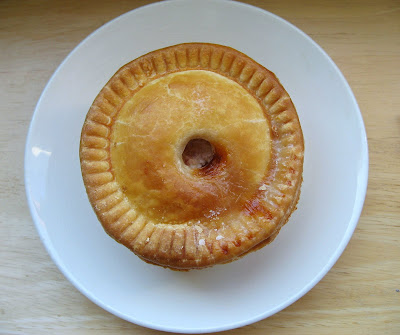 There is a rather interesting group of chaps called the Old Bridge Inn Pork Pie Appreciation Society, which started off as a health club but soon got waylaid....Their meetings start with a beer, after which Weighty Matters are discussed, followed then by the Pie Tasting, including the granting of marks. 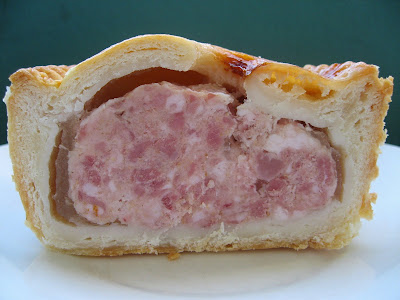 There are in fact two types of pork pies. The one from Patchett's is of the "common pie" variety, using cured meat, produced in a mould/ form, and always pinkish in colour inside.
The Melton Mowbray Pork Pie, on the other hand, uses uncured meat, giving the meat a grey colour. Hand formed with no mould, its hand-formed crust gives it a less uniform appearance.  As is the current case for the Cornish Pasty, The Melton Mowbray Pork Pie Association applied for PGI status. It was granted on 4 April 2008. 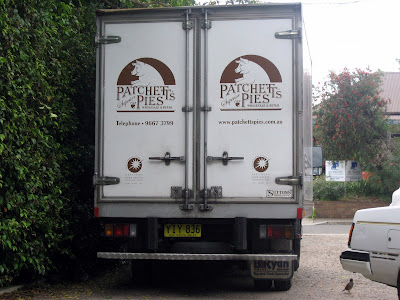 When I view my Country o'er:
Of goodly things the plenteous store:
The Sea and Fish that swim therein
And underground the Copper and Tin:
Let all the World say what it can
Still I hold by the Cornishman,
And that one most especially
That first found out the Cornish Pastie.
The Merry Ballad of the Cornish Pasty - Robert Morton Nance (1898)
[AP]
Posted by The Sydney Tarts at Tuesday, November 03, 2009