Part III- From Modern to Vintage

First up... for those who have just joined us :

I was never IWC-less this whole time though, in one way or another. Around about 2006 I became interested in vintage watches. The creature comforts of modern watches did nothing for me as I opted for a time in watch history when watchmakers made some truly interesting and classic pieces. I started looking at watches from the late 50s to the early 70s, just before the quartz crisis hit the Swiss watch industry.
It was during this time, when I was doing my homework on some of the more well known and generally considered to be excellent movements that I stumbled upon IWC calibre 89. It’s a manual wind in-house movement. Even though it was a massively produced movement in its days, it was never installed in large quantities into a particular IWC which I really liked the style of. 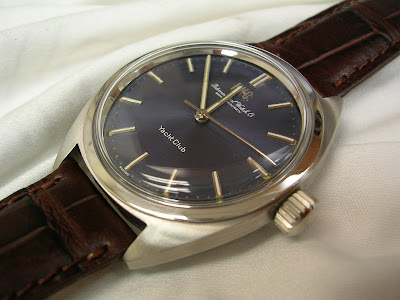 For some reason the Yacht Club really sings to me. Even to this day. I must admit that it’s not really “mine” per se. I gave it to my dad to wear as I thought the watch suited him more than it did me. I like how the lugs are integrated into the case, giving it a somewhat tonneau shape which is a point of difference to all the watches from that generation. The sunburst dial in a stunning blue is very seldom seen. (I’ve come across many Yacht Clubs with either silver or white dial, but the blue was hard to come by.)  The thought of getting a bracelet for the watch did cross my mind, but a quote for it soon banished that idea. (I believe it was around about $1000 for an OEM IWC bracelet to suit the Yacht Club. I didn’t think it was worth it). 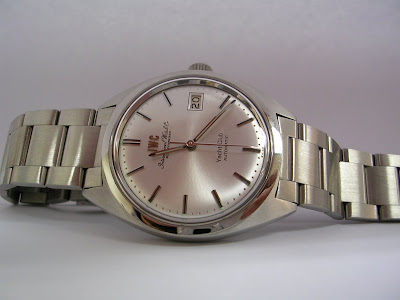 What the Yacht Club looks like on a bracelet - It's very similar to Rolex's Oyster bracelet. Obviously this is not mine, but one I happened to come across. 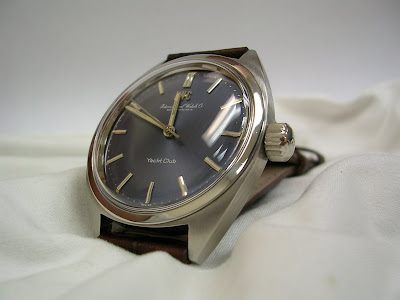 In fact, I really didn’t know that much about vintage IWCs I actually brought along a watchmaker to have a look at the watch before making the purchase. I mean, I researched what I can from the internet and the various forums but nothing is as good as personal experience. He went with me to have a very close look at the watch and the movement. After examinations with a loupe, he okayed the watch purchase and thought the price was quite reasonable. 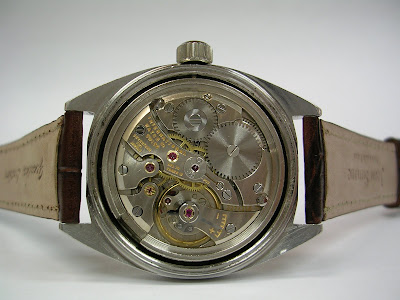 The Portuguese has never left my mind, but it wasn’t the chronograph that I was thinking of. It was the newer Portuguese with the 7-day power reserve. It has all the good Portuguese attributes. A large watch face, making the watch wear much bigger than it is, simple and elegant dial, and a 7-day power reserve to boot! With my kind of watch rotation, it means that the watch will still be running when I pick it up to wear! However, it was not meant to be just yet… as I have yet to come across the right opportunity and the right price… 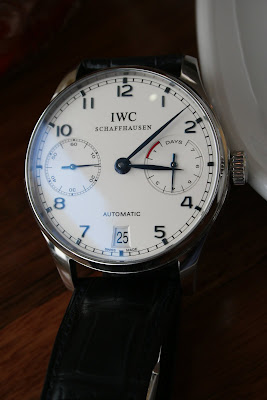 Courtesy of [DY] from his post: Sunday Roast at Burlington Bar and Dining

Stay tuned for Part IV, where I am further distracted by other IWC offerings...