Hands on with the MB&F HM6 Space Pirate

I don't often let my jaw drop. Bad for the bone structure you see. But that one faithful Monday morning, courtesy of The Hour Glass Sydney, I carelessly let mine drop. Twice. The first was upon seeing the MB&F HM6 in the flesh. The second was when I heard the price. 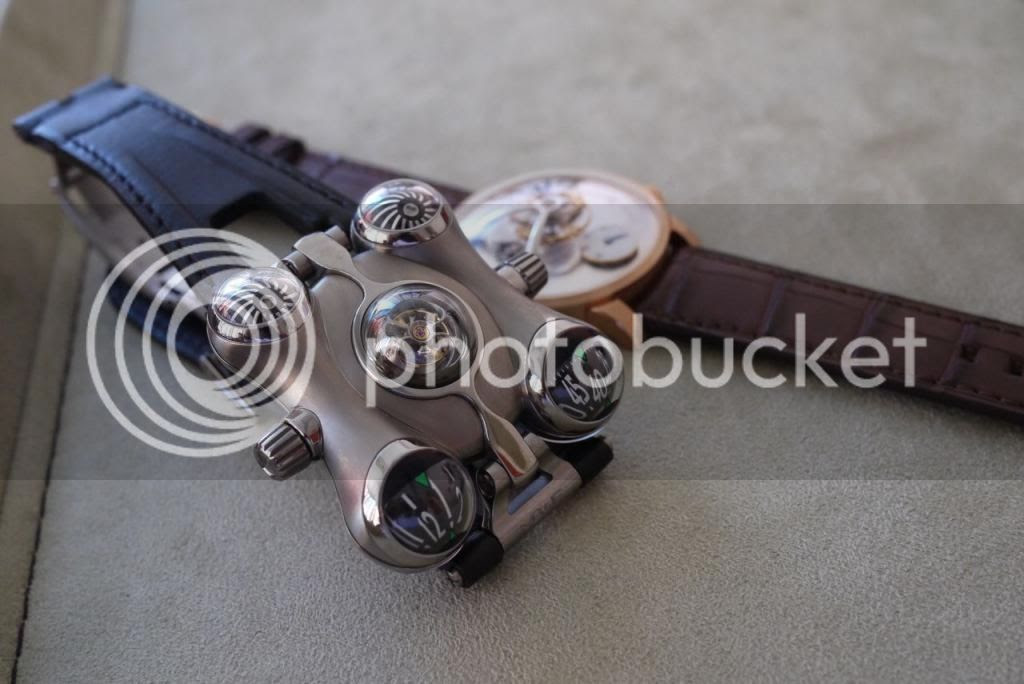 After I picked up my jaw and clicked it back in place, (come to think of it, I probably didn't put my jaw back properly after the first drop, hence the ease with which it dropped a second time...) I gathered my wits about me and admired the creation as the MB&F Head of Communications, Charris Yadigaroglou, sang its virtues. To be honest I was only half paying attention. I was too mesmerised and captivated by the HM6. (Apologies to Charris) The moment I put it on my wrist I knew I wanted one. It was as if the HM6 was made for me. The tourbillon which resides top and centre was the eye, with the titanium shutters its hi-tech eyelids, met my stare and urged me on. "Buy me buy me" it conveyed subconsciously and telepathically to me. 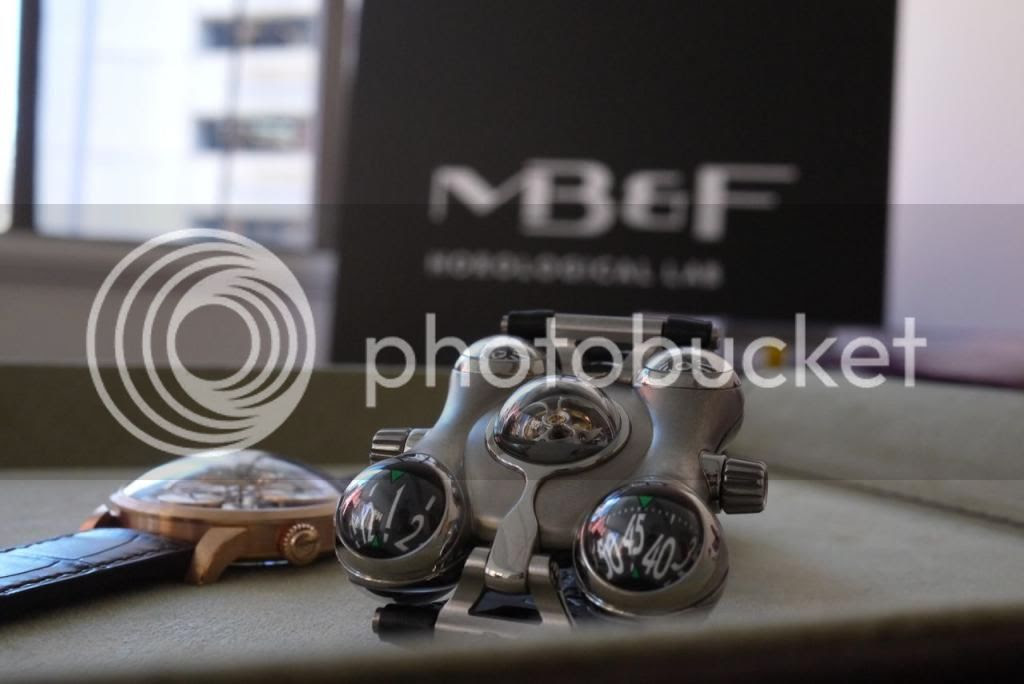 I shook it off and returned to reality. Just the fact that it EXISTS is astounding. I won't go into the details but a few things certainly stood out for me. The turbines being connected to the rotor, at 90 degree angles. The shutters. By playing with it you know it wasn't easy making it work as smoothly as it does. The shape of the case. THAT could not have been easy to do. The shape of the sapphire crystals (count them- 10 of them!) Nothing in this watch is off the shelf. And it's so wearable. 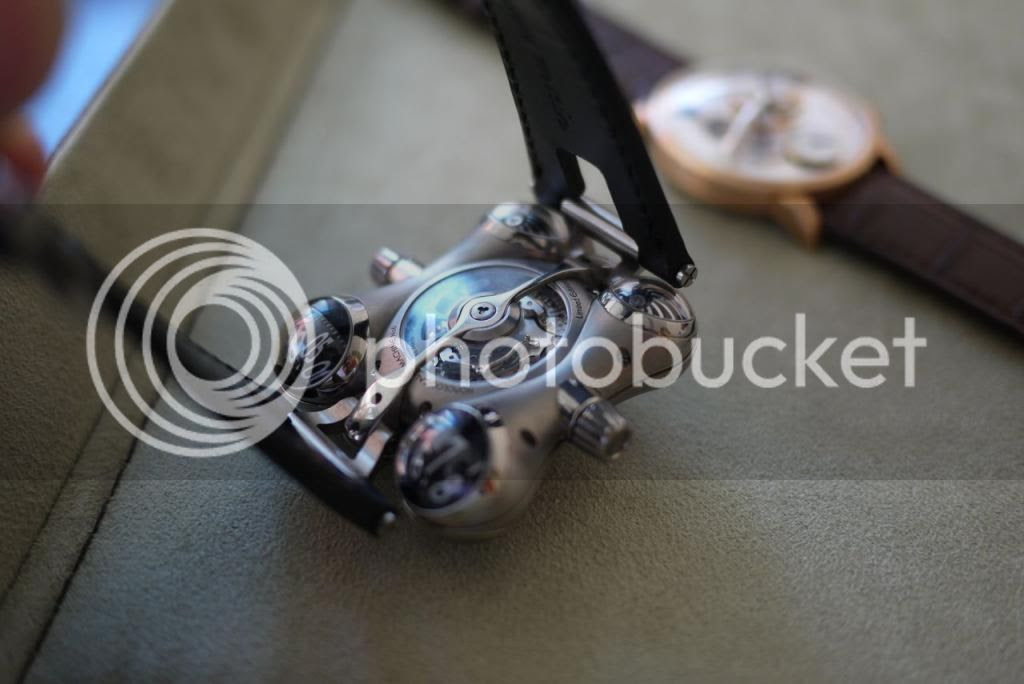 Of course, the HM6 is not designed to appeal to everyone, nor do they want to. If everyone loved it, then to MB&F, it's a failure. And for a 50-piece run, they don't need too many people liking it. This keeps the circle small, and enables the brand to have a more personal contact with each owner. And like Panerai, it seems MB&F owners cannot seem to stop at just one. But unlike Panerai, each machine looks so completely different, whilst retaining somehow, a sense of familiarity. And calling them "machines"? I think that's underselling them a little. Especially the HM6, whose organic form is almost alive. (You cannot tell me the HM3 Frog isn't alive!) Plus I swear it was communicating with me. Something about selling the house. And a kidney. 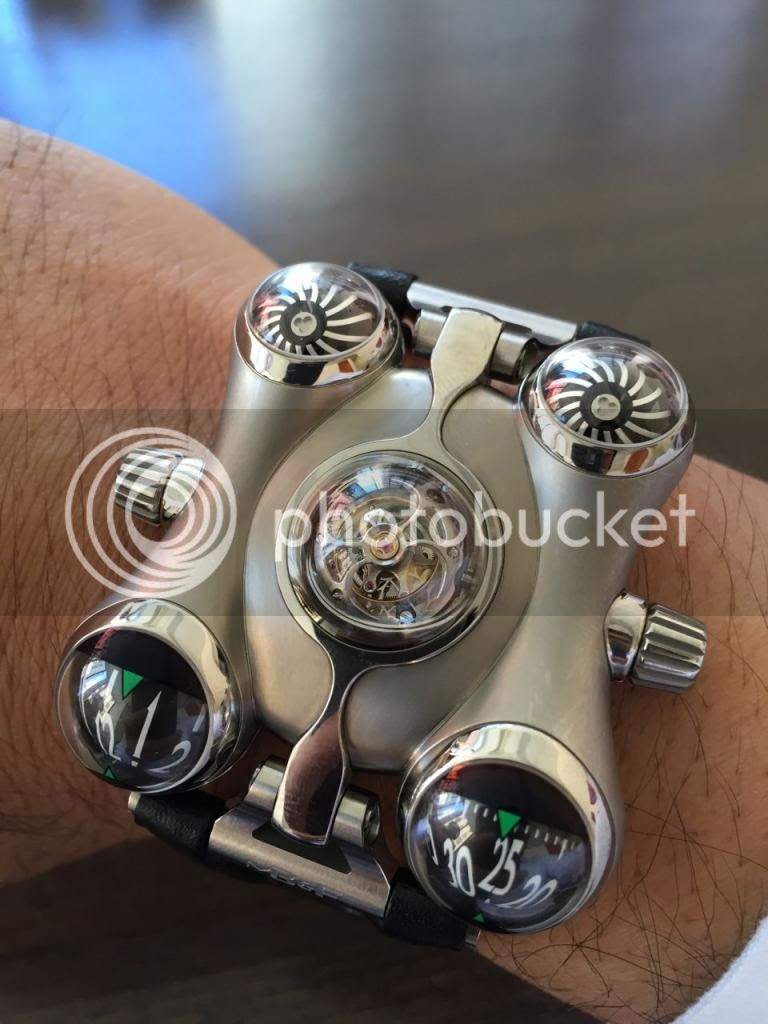 What's also impressive are the lists of "friends" that corroborated on each project. You feel as though you're part of the family. You can put a name and a face to each part of the project. You know who did what. Just like those Mercedes AMG cars where the person responsible "signs" the engine they built. It's not done by some machine deep inside a factory somewhere inaccessible, like a Bond villain secret base. Each piece has the warmth and sincerity that is missing from today's mass-produced and mass-marketed production line commodity. 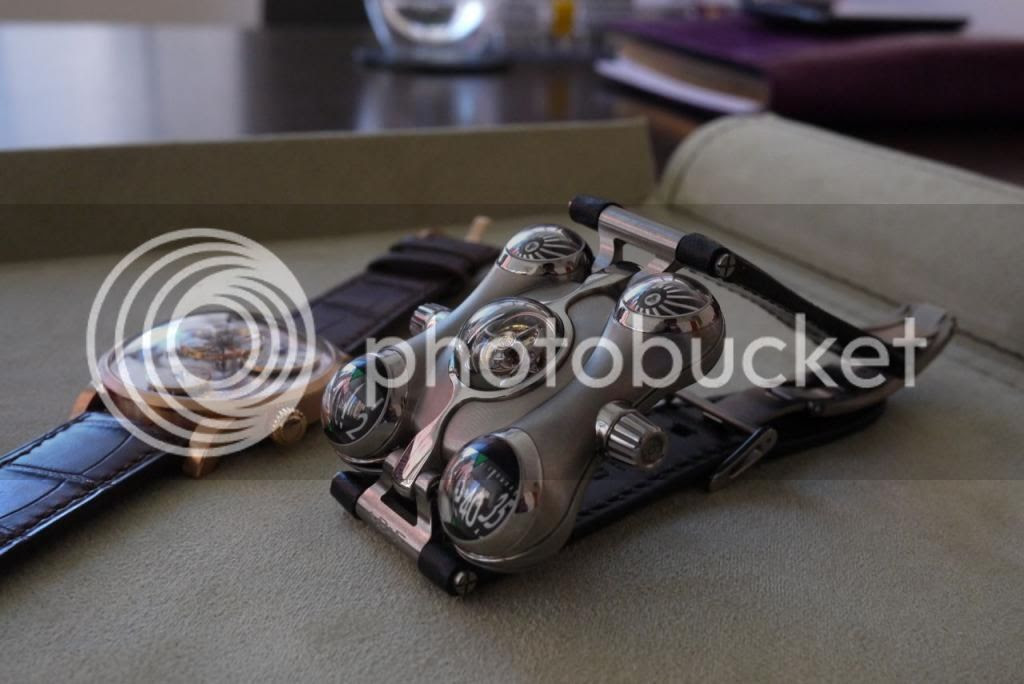 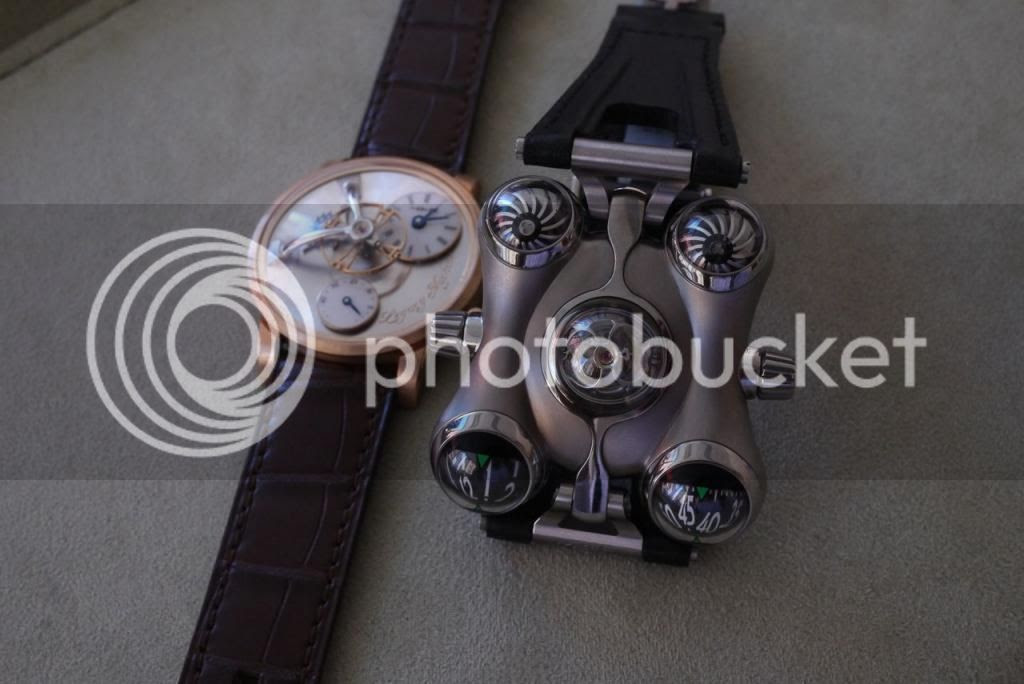 As we all know, this sort of craftsmanship, rarity, research and development and skill set all comes at a price. Price might be stupidly astronomical for something that could barely tell the time, and has no diamonds/precious metals but if you're looking at it as something to tell you the time, then I suggest you're looking at it all wrong. It's a collectable piece of art masquerading as a timepiece. And with this in mind, the odd quarter of a million dollars doesn't seem so bad. 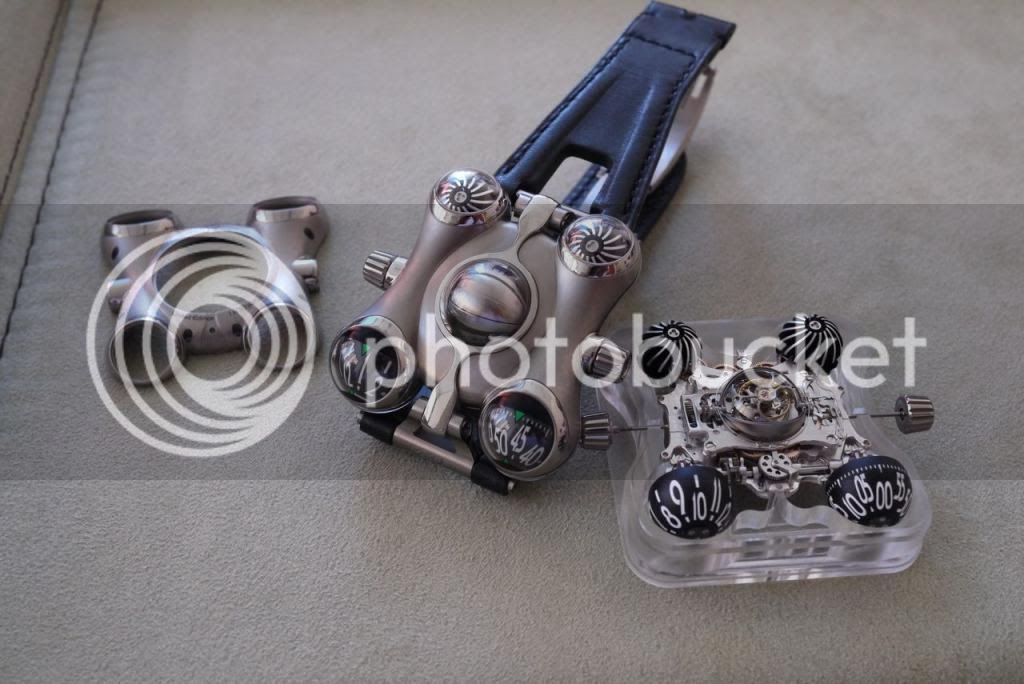 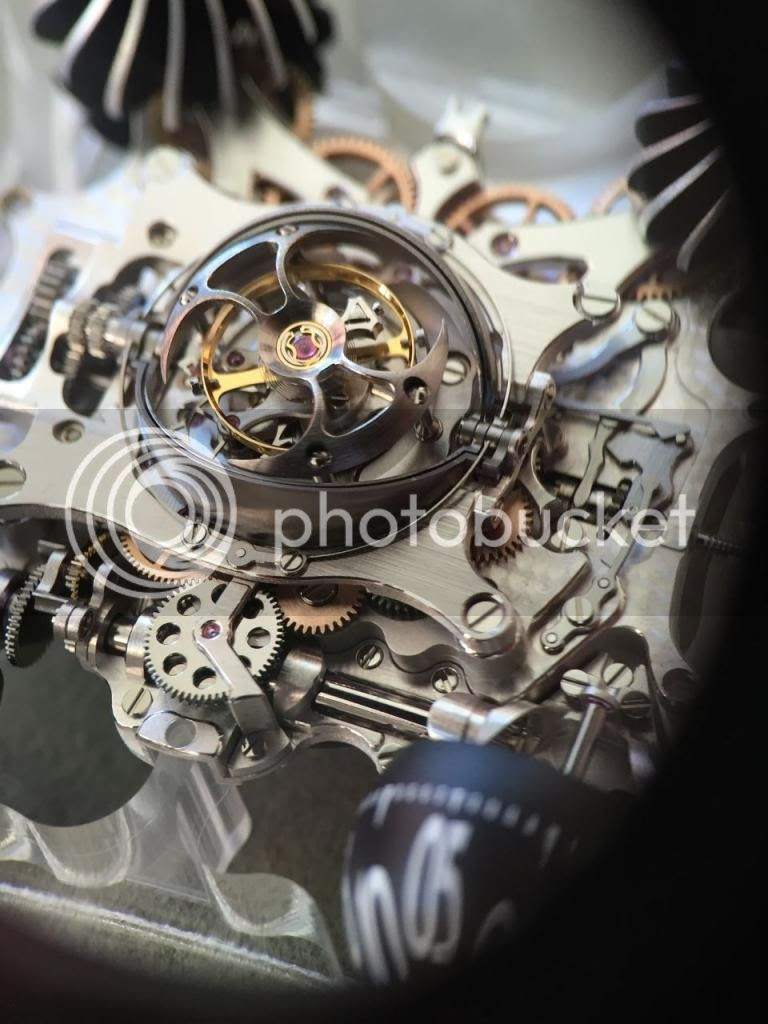 Like art and wine, this is an investment. Even if I sold my home (something the wife might frown upon) and gave the bank its share, I'll still be nowhere close to having the funds to afford my favourite MB&Fs (HM4,5,6 and all the Legacy Machines), so here's what I propose. I'm looking for 50 people to buy shares in the MB&F Ownership Investment Trust Fund. $5000 buy in and this gets you a share of days to wear the HM6, (A second investment fund will be set up for other models) and the possibility to borrow against the equity for other lesser investments such as a property.* Leave your name and bank details below. I'll be in touch.


*details to be worked out later.