One of my pet peeves is the level of customer service, or the lack of it, in this country. (This is of course, a very general generalisation. There are always exceptions to these claims.) Banks, for instance, are one of the biggest offenders. Restaurants would be the other... Yes there are different levels of customer service and the service need to be suitable for the particular product/service provided. Having worked in the customer service role for most of my life (and yes, I count sales as customer service, since you're dealing directly with customers, and providing them with a service) I know how important this is.

For example, I wouldn't expect friendly/knowledgeable staff at a fast food joint. I'd want my food fast, and if I get the food fast (I think the standard is under 3 minutes) then I will be satisfied that I have received good service.

The two restaurants offering less-than-normal services shall remain unnamed, however, I am merely stating some facts... The first one, a high-end joint with water views, took more than 30 minutes to deliver on the plate of sushi, despite numerous requests to check up on the order and that it was taking much too long. For those who have sat at sushi train style restaurants and have watched the masters at work, you'll know that it does not take that long to cut up some raw fish and stick them on rice. Nor does it take that long for an experienced master to roll up a sushi roll. 30 minutes is excessive, especially considering that the restaurant wasn't all that busy. And this is at a high-end restaurant.

The second one, a more 'regular' priced Japanese restaurant very close to a certain line train station, was kinda known for their slowness. But we've always put it down to it being busy with lots of customers. However, recently, we were one of maybe 4 tables there. It took more than 30 minutes (I lose count after 30 minutes as my brain compacity is greatly reduced from hunger and lack of food) for a very very basic udon and a sushi roll to come. For those of you who are experieced with instant noodles, you know it's a maximum of 5 minutes. To take 30 minutes to make a fairly ordinary udon? As the kids these days would call it: EPIC FAIL.

Let's move onto something more pleasant......

I have nothing but praise for Akaneya. Granted, they're on the slightly higher end of what is considered to be a reasonable price range for Japanese food in . But this is a well establised place, and I am a long time customer. It just so happens that it's been a while since I went there, and man, they did NOT disappoint. On the contrary, I was thrilled with their service!

The delightfully icy cold Asahi beers arrived almost immediately after ordering, and I had barely had the time to take a couple of artistic shots of the beer before the sushi/sashimi boat arrived on the table, and the seaweed udon, and the salmon roll came almost immediately after. I didn't even have time to check my watch but I was pretty sure this all happened within 10-15 minutes of ordering. Keep in mind that when we ordered the restaurant was about two-thirds full already. This speed borders on lightning and considering we were both tired and hungry, this was very welcomed and we got stuck into the fresh, and healthy meal. 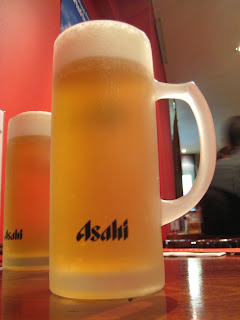 Yes, the sashimi was very fresh, cut thick, just the way I like them. And I like the boat it was served on. I don't know what people's issues with the boats are. The boat is good. The portions are excellent for the money, and there’s nothing worse than having an unsatisfactory meal. You won’t get that here… They do really good sushi and sashimi, and although the bento boxes are very big, I think it’s more worthwhile to get the sushi/sashimi here. Good bentos can be had in places like this. 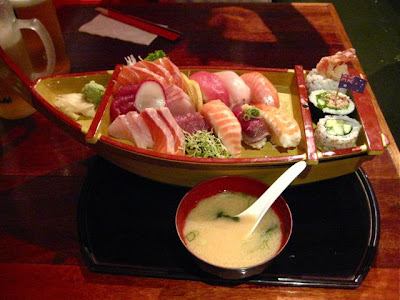 The Sushi Sashimi combo, served on a sushi boat 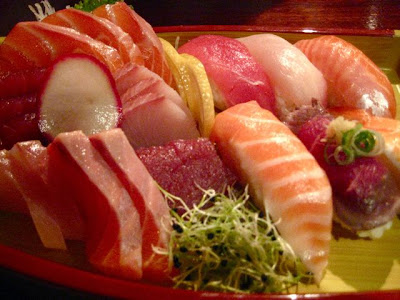 As you can see, the sashimi and the nigiri are very fresh, the colours are vibrant, and the nigiri had an almost perfect fish-to-rice ratio
(I think the rice was just a tad too much).
For a run-down on the ideal fish-rice ratio, please see here

I ordered the Salmon Tartare roll, which is just salmon roll with extra tartare sauce. That might not sound like much, but it's amazing how a little sauce can change the taste so much! The tartare sauce gives the sushi roll that extra kick, making it a great combination of flavours. 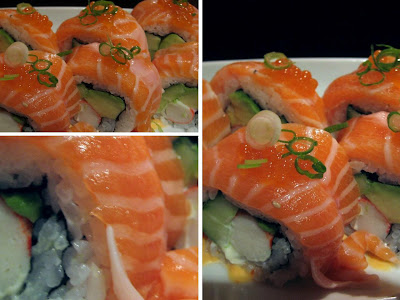 One slight issue I have is that the acoustics aren't very good, meaning that when the restaurant is packed, (which it tends to be) the noise level can get a bit overbearing and it becomes increasingly difficult to have a civilised conversation without resorting to shouting over the noise. But I think it's great to have such a lively atmosphere, knowing that everyone there are enjoying themselves. I reckon they'll give a good Yum Cha place a run for their money in terms of overall noise! What the hey... it'll almost rival Ivy...

A bit of customer service can do wonders. We were so happy with the speed of the food, the quality of the food, that I felt the need to tell the world about it. Plus I'm going back again. Very soon. All those other Japanese restaurants please take note...

i'm glad you found the service at Akaneya really good. I did as well. probably some of the best customer service I've come across — so friendly. did they have the soft shell crab salad on the menu still http://simonfoodfavourites.blogspot.com/2009/04/akaneya-sydney-29-april-2009.html :-)

They have soft shell crab salad??? I didn't even look at the salad part of the menu. Will look out for it next time I'm there!