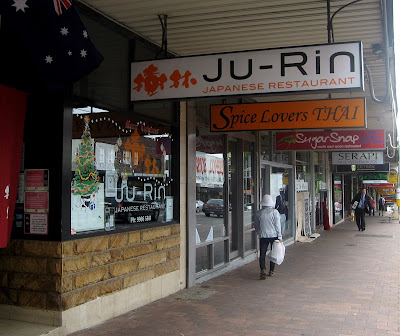 Having not grown up in Sydney, and despite now having lived here for a decade, I am still bemused by the "Bridge Issue". For all its fame etc, now and then I seem to encounter some sort of a strange sort of "bridge block" when it comes to crossing over and heading North.
It's a shame, as there are good places to visit "over the bridge", less than ten minutes from the CBD.
One of these is Ju-Rin. 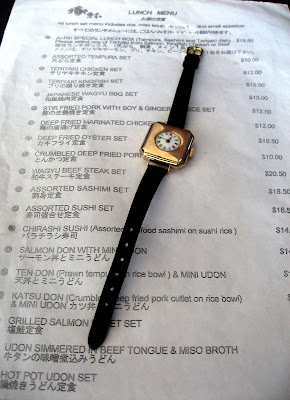 I arrived first, so as I waited I did what watchnuts like to do - take photos of their watches! In this case, a vintage watch of unknown brand, with a "red 12". 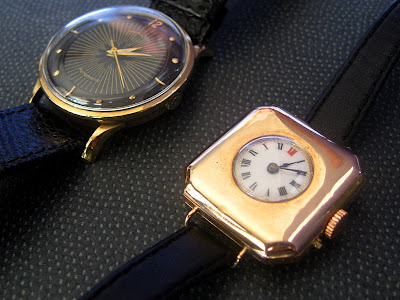 The arrival of P naturally meant a further "table shot". As opposed to more modern watches than this, the hands on the vintage red 12 are moved after the small "button" beneath the crown is depressed.
The other watch is a Hamilton "Starburst" (as in the dial design is akin to a starburst). Hamilton is an watch brand with a long and illustrious history in the US, especially relating to pocket watches, but which is currently owned by the Swatch Group.
First up we have my order - the Ju-Rin Special Lunch Box ($18.50). 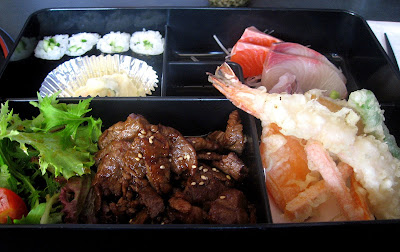 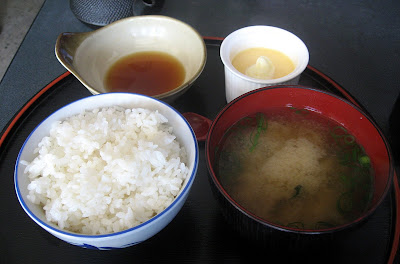 Plus rice, miso soup and a dessert
This lunch bento was uniformly good. The quality and taste of the beef in particular, was something that struck me immediately.  The sashimi was very fresh, the potato salad (small foil patty case in the first photo) was better than many I have tasted, and the tempura was executed nicely, the batter neither too heavy nor oily.
I admit to not being a miso soup connoisseur; though I know bad miso soup, I haven't yet developed the experience in being able to discern the attributes of the highest quality miso. What I can say about Ju-Rin's, however, was that I noticed that its taste was, again, above the average standard of the Japanese restaurants which I tend to haunt in Sydney.  That all being said, I have been to the rightly lauded Sakana-Ya, which is less than a minute away from Ju-Rin, a few times before, and though I have definitely had and enjoyed their miso soup, I don't remember it having made as distinct an impression for some reason!
P's choice was the Assorted Sushi Set ($18.50) 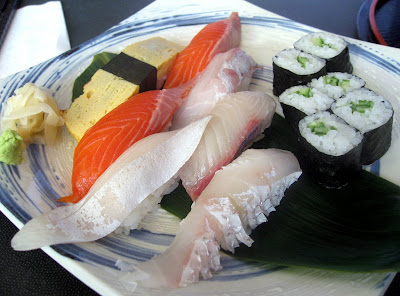 A beautiful assortment of nigiri sushi and (cucumber) hosomaki sushi, the fish tender, succulent and fresh.
The proportion of fish to rice in sushi is one of its most important aspects (the others being related to the fish/ filling and the rice : vinegar ratio); there needs to be a balance in proportion between the two.
In investigating what this proportion should be, I came across various schools of thought, ranging from a proportion of about 4 to 1, a weight of exactly 3/4 of an ounce of fish, and dispute about whether the the fish should extend beyond the size of the rice. One Hiroko Shimbo, author of "The Sushi Experience", believes a piece of fish measuring 1.25 by 2.75 inches is recommended.
At the moment I'm reading "The Ramen King and I" by Andy Raskin. Prior to his Ramen Awakening, he had a minor sushi obsession. During this, he became fixated on a book called Kanda Tsuruhachi Sushi Stories, a memoir by a renowned sushi chef called Yukio Morooka. Chef Morooka believes that a customer should be able to eat the sushi (by hand) in one bite, and that the fish should be sliced so that, when viewed from the side, the cut resembles an unfurled paper fan.
Not being yet well equipped to voice a firm opinion on this matter beyond a personal view that the fish to rice proportion should definitely be as such that the fish overhangs over the edge of the rice, I will restrict myself to saying that P's sushi looked good (fish hanging over the rice or no fish hanging over the rice) and he enjoyed it. 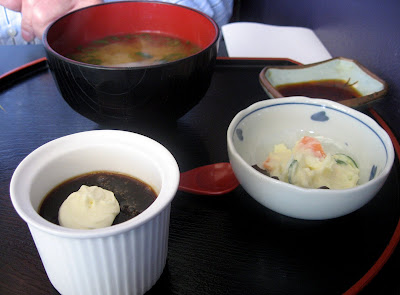 The dessert that came with the Assorted Sushi was a pudding of coffee flavour. As I did not taste any, unfortunately I can't offer an opinion.... 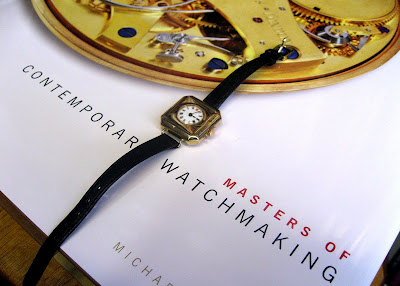 As always, a final "watch shot", this time of a beautifully photographed book that is an essential for any watch lover, and which was our companion during lunch.
Masters of Contemporary Watchmaking contains photographs of the work of renowned watchmakers such as George Daniels, Roger Smith, Svend Andersen, Vincent Calabrese, Philippe Dufour, Antoine Preziuso, Aniceto Jiménez Pita, Alain Silberstein, Marco Lang, Vianney Halter and Peter Speake-Marin. A nice heavy tome, it is pure watch lust!
As well as Sakana-Ya, The Burlington and MuMu Grill are worth crossing bridge and heading into Crows Nest for!  Last but not least, between Ju-Rin and Sakana-Ya you will find Antique Bookshop & Curios, where you can get some brain food after having satiated yourself with the other type.
[AP]
Posted by The Sydney Tarts at Friday, December 18, 2009

I've heard of Ju-Rin before but only tried Sakanaya to this day. Which is the winner of the two?

Interesting little insights into sushi-making and miso, I felt like I learnt something today : ) Don't feel bad about not being a connossieur, taste-judgement is all so subjective anyway...

I haven't been to Sakana-Ya for a while, and I'd like to go back to Ju-Rin again before making any definitive comparison. They are different in ambience and also menu diversity. I think I like both. If asked to choose on the day it might be random :)

Glad that you learnt something about sushi ;) I don't think that sushi book is translated into English, alas, or I'd buy it!