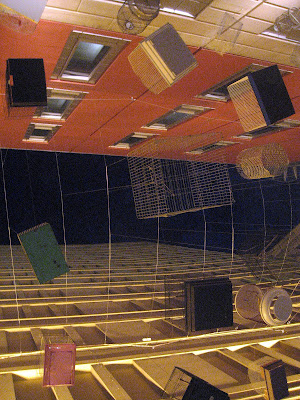 Tucked away behind George St and connecting with Angel Place, Ash St Cellar is part of the Ivy complex behemoth. Standing out somewhat from the rest of its Merivale siblings, it is a cosy establishment with a large wine list and tapas-style dishes from head chef Lauren Murdoch.
Ash St is a mostly outdoors space, the inside welcomingly understated in dark woods and consisting of a small bar counter, communal table and small tables. Overhead are chandeliers and wines, the open kitchen taking up part of this intimate space.


Part of a party of five, we ordered a few items to go with our drinks. 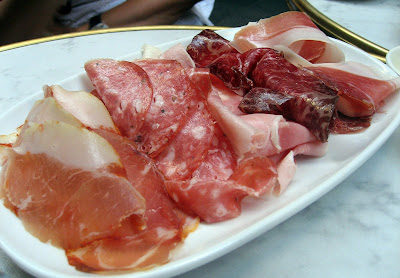 Cured meat selection ($34)
First up was the Cured meat selection, which consisted of Quattro Stelle shaved leg ham, Saussicon Sec, Wagyu Beef Bresaola, San Daniele Italian Prosciutto, and Spanish Jamon Serrano. Unfortunately, due to the seating arrangements (i.e. I was at the other end) and the rapid rate at which certain salumi disappeared, I only got to try four of the five, but oh my, that Wagyu Beef Bresaola was amazing. I would have been happy with just that. I've eaten a lot of cured meat recently, but this was something special. 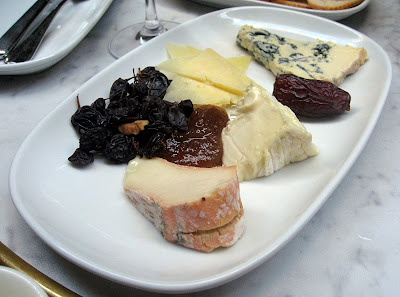 Selection of local and imported cheeses with walnut bread : 4 pieces ($24)
Alas the selection of cheese was even further away from me than the cured meats, and it seems that one cheese in particular was extremely popular, as it disappeared rather quickly. I didn't even get a chance to try half of them..... 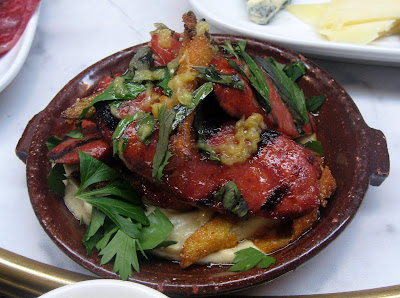 Chorizo with polenta, parmesan crumbed artichokes, mint & lemon ($22)
The chorizo was slightly less spicy than some I've had, and a welcome variation on the chorizo tapas which I inevitably seem to encounter, the additional components to the dish providing contrasts in texture and flavour.  One of our party was so taken with it that she used some bread to scoop up every last bit of the polenta. 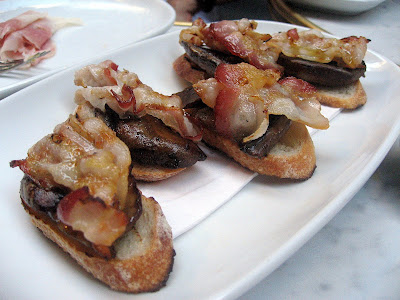 Grilled gaunciale (cured pig's cheek)  & mushroom bruschetta
Lauren...Mmm...thank you! This brushetta just rocked my world. I am not always a fan of lots of cooked pork fat but this was just so more-ish; soft and unctuous, the mushroom the perfect partner. It might not be good for my arteries, but I want it again soon. 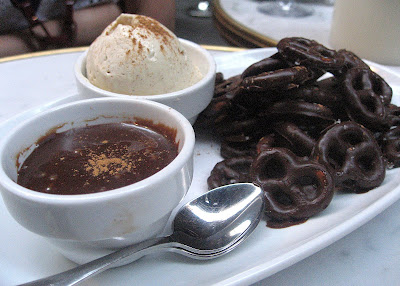 I'm calling this A Few Cs and one P.
I was about to ask about the tart of the day, which was resplendent in its own window, when this cinnamon chocolate creamy richness arrived.  There is no need for me to describe the decadent layer of chocolate upon chocolate and chocolate upon cream, I think that you can imagine it....
The two pages of tapas at Ash St are dwarfed by the twenty two page wine list, which can be viewed at their website and includes taster, glass, carafe, and bottle options.
As dusk turned to night and we walked back into the end of year madness of George St, we saw these bird cages, motion activated to generate birdcalls. I had read about this installation, called "Forgotten Songs", but totally forgotten about it.  Unfortunately this is not a permanent fixture, but in the meantime it has turned an otherwise drab laneway into a place of enchantment but loss as well, as the sounds are of birds which once frequented this area. 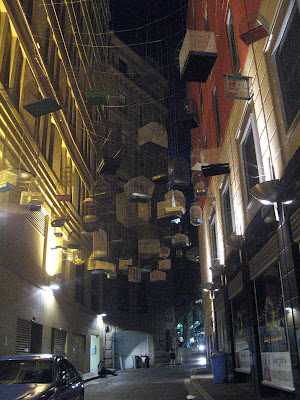 There is a famous establishment in Tombstone, Arizona called the Bird Cage Theatre. It opened on 25 December 1881, operating 24 hours a day nonstop for a mammoth eight years as a theater, saloon,  gambling parlour, and brothel. I am assuming that someone has counted them, but I read that there are 140 bullet holes in the walls and ceiling. The "bird cages" were private boxes near the ceiling, where for $25 a chap would get a bottle of whiskey and a lady for the night.
The old basement poker room at the Bird Cage Theatre is reputed to have been the site of the longest-running poker game in history - nonstop for basically the entirety of the Theatre's existence, with possibly 10 million dollars changing hands. The poker game ended and the building sealed up in 1889, remaining untouched until it was re-opened in 1934.
Nowadays, the Bird Cage Theatre is resigned to the rather more sedate existence of a tourist hot spot and merchandise happy museum where you can purchase a replica "$25 Bordello Coin" for $19.99.
Like the rest of the Ivy establishments, Ash St Cellar is a little on the moderate to higher price end of the spectrum, but if you find yourself on a balmy Summer's evening looking for a centrally located place with a relaxed ambience where you can actually conduct a conversation with friends, you could always have a glass or two and a plate or three at Ash St Cellar. It's a good deal more enjoyable than the $69.99 replica of "Big Kate's Pistol".
[AP]
Posted by The Sydney Tarts at Wednesday, December 30, 2009