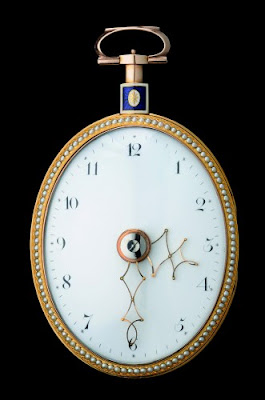 You have probably noticed that I am rather taken by ‘alternative’ methods of time display; jump hours, mystery hands, rotating satellites, the use of liquid...well here’s another watch that has captured my attention for a time-telling difference. It's a two-hander, but a quirky one.
The Musée d'Horlogerie du Locle is located in a small historic country manor house called Château des Monts, about 1km north of the centre of Le Locle, in the canton of Neuchâtel. Open to the public, as well as a general collection of historical timepieces and movements, the museum’s collection also holds three specific collections :
1. Collection Maurice Yves Sandoz – which includes 18th and 19th century Swiss automatons.
2. Collection Henri Jeanmaire – with its focus on marquetry clock cases made by Charles André Boulle during the period of Louis XIV.
3. Collection Alfred Huguenin - focusing on the history of the Neuchâtel style pendule.
One of the pocket-watches that forms part of the Sandoz collection is a circa 1800 oval piece by British watchmakers Vardon & Stedmann. It features telescoping hands which expand and contract to follow the shape of the case, the hands driven by a cam hidden above the centre pinion.
The Sandoz family own Parmigiani Fleurier, and have decided to create a modern iteration of this piece, called the "Toric Ovale with Telescopic Hands". Limited to 30 pieces in white gold and 30 in rose gold, the flame-blued telescopic hands (identical to the original) get longer and shorter as they move around the oval dial, retracting as they approach 3 and 9 o’clock, expanding at 12 and 6 o’clock, and remaining equidistant from the bezel at all times. The use of only four Arabic numerals highlights the pared back look of the dial, with the numbers, markers and power reserve all matching the blued hands. 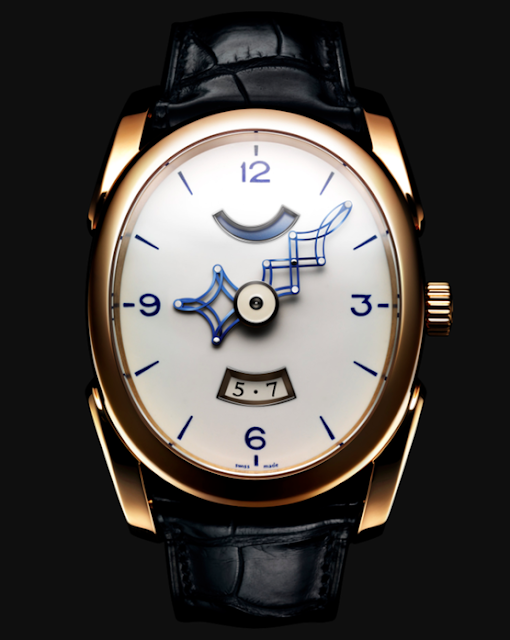 The dial itself, with a date and eight day power reserve, is an exercise in symmetrically balanced simplicity. The Grand Feu enamel and blued-hands combination is a classic elegant combination that I am drawn to.


Powered by Parmigiani Fleuerier’s automatic calibre 111, which can also be seen through the open caseback, I find this a very engaging watch (and I am not usually one for oval shaped watches). There would be a huge temptation to let the watch sit aside to stop just so I could watch the hands telescope when I adjust it to the correct time.

At $95,000 this is not be a cheap horological plaything, but even if this is within your financial capacity, there’s still the small problem of the size. At 52mm x 37.8mm, this is staggeringly big. A bit too big for a dress watch, a bit too big for a wearable watch. Perhaps they’d have been better off remaking it as a pocketwatch?
Here is a video from youtube with an explanation by Parmigiani USA President Marcia Mazzocchi, where you can see the telescopic hands moving.

My curiosity about the name lead to some Googling. Maths isn’t my strong point, and it has been many years since I was at school. It turns out that in mathematics, a torus is the spatial body resulting when a circle with radius r rotates around an axis lying within the same plane as the circle, at a distance R from the circle's centre. If you’re that way inclined, you can read more about it here. A toric contact lens has a different focusing power horizontally than it does vertically. Now, the name makes sense.