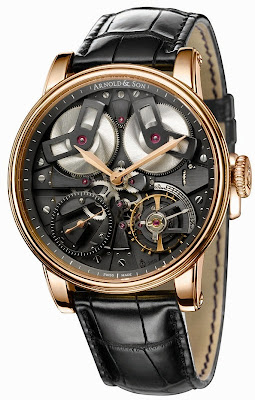 British watchmakers Arnold & Son have just released a watch with a rarely seen complication. As the name indicates, the new Arnold & Son True Beat 88 features a ‘dead beat’ seconds. Another ‘dead beat seconds’ we’ve looked at is the Grönefeld One Hertz. The '88' in the name is a nod to John Arnold’s earliest known pocket watch, of which the original case bears the number ‘88’.
A wristwatch with deadbeat seconds shows a second hand that ‘jumps’ in one second steps instead of an apparently smooth sweeping action (which is in fact several rapid jumps). You see the second ‘jump’ in quartz watches (and if you want to see a really smooth seconds hand, look at Seiko's Spring Drives), but as a feature of mechanical watches, its popularity has waned.
To backtrack a bit, the number of hourly vibrations corresponds to the frequency of a watch movement. Frequency is a measurement of the number of times that a repeated event occurs per second. The number of vibrations per hour (vph) of a timepiece determines the breaking up of time (the ‘steps’ of a second hand). For instance, 18,000 vph (2.5 Hertz) equals a vibration duration of 1/5 second (i.e. five jumps a second); 21,600 vph = 1/6 second; 28,800 vph (4 Hertz) = 1/8 second; 36,000 vph (5 Hertz) = 1/10 second. Until the 1950s, wristwatches worked mostly at a frequency of 18,000 vph. Today, the most common frequency adopted is 28,800 vph.
The term ‘dead-beat seconds’ is said to derive from the fact that the hand remains dead, or motionless, for as long as the second has not actually elapsed. Thus, the hand indicates that same second even though its exact time has actually passed. 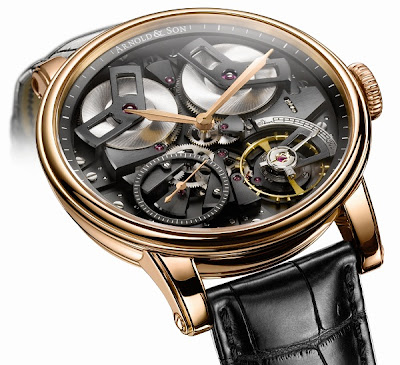 The ‘true beat’ complication in this watch is via the new Arnold & Son 5003 hand-wound movement. Developed for the brand, the movement is 38mm diameter and 6mm thick, and the calibre has an ‘inside-out’ design, meaning that elements which are usually hidden behind the main are now in front, and visible through the skeletonised dial.
Cased in a rather large 46mm case, the size of which will rule it out for most people, True Beat 88’s dial is nicely symmetrical, with the dead beat display at 7 o’clock balanced by a power reserve indicator. The two barrels which generate the power reserve are at the top.


The TB88 is available in three iterations, including one with a diamond bezel. To my tastes, the stainless steel is probably the most attractive one, not just because of a personal metal preference, but also because of the contrast between the black and brushed components. 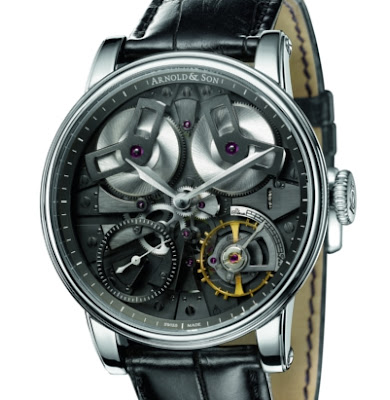 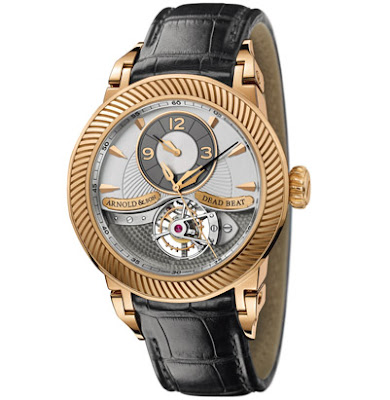 It’s interesting to note that this isn’t Arnold & Son’s first true/ dead beat. There was also the limited edition 2010 “Dead Beat Tourbillon” with a movement developed for them by Manufacture La Joux-Perret (who are presumably also behind the TB88 movement), the calibre A1765. It was made in a fractionally larger case, at 46.5mm, and had a dead beat centre sweep second hand. It was released in two different bezel versions : gold striped bezel or gold wave. The rose gold version was produced in a limited 25, plus five with a diamond set bezel.

The RRP for the steel is 36,180CHF and for the rose gold version, 52,920CHF.
Oh and today my time (tomorrow for the rest of you) i.e. 22 February, is the 155th anniversary of the birth of Heinrich Rudolf Hertz. The hertz (Hz) unit was established in his honor by the IEC in 1930 for measuring frequency, and this was adopted by the CGPM (Conférence générale des poids et mesures) in 1964.