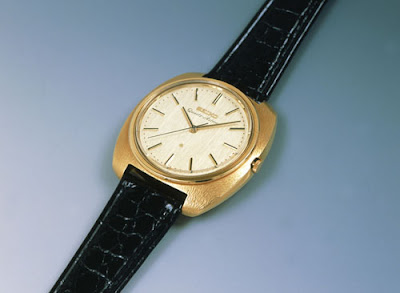 December 2009 was the 40th anniversary of the world’s first Quartz wristwatch, the Seiko Quartz Astron 35SQ. Based on a quartz crystal oscillator (an electrical signal with an extremely precise frequency), its importance is acknowledged by its registration on the IEEE Milestone list as a major advance in electrical engineering.

Seiko marked this anniversary by the commissioning of 40 new watch designs all based around the original Quartz Astron design, which were exhibited in the ‘Seiko Power Design Project’ in Dec 2009.

The culmination of Seiko’s commemoration was the new Quartz Astron, powered by the SEIKO quartz caliber 9F62, accurate within 10 seconds a year, and with its date change completed in an astonishing 1/2,000 of a second.

In 1880 Pierre and Jacques Curie discovered the electrical potential of quartz crystals when pressure is applied, known as piezoelectricity. They devised the piezoelectric quartz electrometer, which can measure faint electric currents. The question was then how to practically apply this.

By 1927 Bell Laboratories demonstrated that accurate time could be measured by using a quartz crystal and implementing the results of the Curie brother’s experiments. In 1959 Suwa Seikosha Co Ltd, one of Seiko Group’s Research and Development labs, built its first quartz timepiece, a large clock 2 meters high and 1.5 meters wide, which was successfully used in a radio station in Japan. The task was then given of miniaturising this new technology, and Project 59A was launched.

In 1962, the company managed to produce ‘smaller’ (30kg) version of a quartz marine chronometer, which was utilised in the Japanese shipping industry.  By 1963, Seiko managed to further miniaturise it down to the 3kg QC0951.

Launched at Basel in 1969, the original Quartz Astron was produced in 18 carat gold case in a run of 100 pieces, costing JPY 450,000, more than a Toyota Corolla at the time.
The first quartz watch that was available to the general public was the 3823 caliber, also known as the 38 SQW, which was introduced in October 1971 at a price of JPY 150,000. This was equivalent to two month's salary for a Japanese university lecturer. 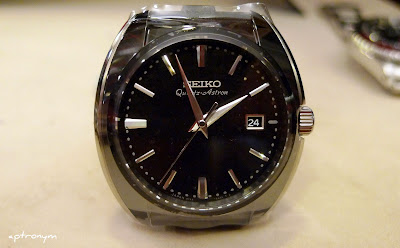 Recently, two of us were fortunate enough to be shown one of these new Quartz Astrons, a rare beast in Australia.

Its specs are as follows : 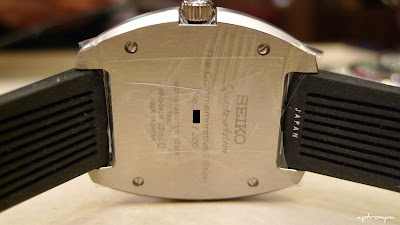 One of us was fairly much ambivalent about it, preferring to look at a Longines Heritage Collection model.  I, however, found myself unexpectedly drawn to this watch. It looks modern yet retro, is very lightweight, and most importantly, sits nicely on the wrist, the strap incredibly soft and very comfortable to wear.

Am I an anti-quartz fiend? Well it’s not a case of absolutes, as I do own a modern Lip Mach 2000 and a Tokyo Flash watch for which I can’t remember how to actually tell the time, but I’d be lying if I didn’t admit that my preference is for mechanical movements.

My watches are a rather varied lot, and I developed an immediate liking for this watch, but $8,500 worth of ‘like’?  Well even if I could afford it, no.

This brings me to the price of this watch :

RRP Europe: Euro 4,300
RRP U.S. USD5,000
RRP Australia AUD8,500
Such pricing issues are well-known to those of us in Australia, and there is increasing awareness amongst brands that this needs to be addressed, as such discrepancies at these price points (and even lower price points), let alone higher ones, inevitably lead to people buying their watches overseas – in the end the Australian market suffers.  I am lead to believe that this is something that is currently being discussed amongst many brands, and not a moment too soon.

I am a watch neophyte, and was just wondering - why is there this discrepancy? It's something I see repeated countless times in just about every industry here in Australia - I would have expected the arbitrage market here to have caught up somewhat by now.

Price aside, this is a lovely watch.

I am a big fan of Seiko watches, particularly the Spring Drives and the Grand Seikos but I have to say that the price differential between countries is an insult to the Australian watch-buying public!
I was recently in the Seiko Boutique in Paris and was offered this watch for 4,400 Euros, about AUD$6,500.
Imagine my surprise to come back to Australia and find that the retail here is $8,500.
Note to Seiko: "You cannot continue to do this and maintain your credibilty with those who appreciate and purchase your watches."
Apart from being unfair to the customers, it is unfair to the ADs who are expected to sell the watches at a huge premium over the price elsewhere.
Remember that we now have a global economy and a global exchange of products and the price differences will ultimately be unsustainable.

Nevertheless it is a lovely watch but I just can't bring myself to the point of buying it and supporting such an unfair pricing regime.

We are talking about the Seiko Astron in particular here but in fairness I have to say Seiko is not the only watch company slugging Australian customers.

Many more people travel today and in time, unless the companies address this inequity, more and more watch purchases will be made overseas. It may even be advantageous to travel especially to purchase a particular watch, especially when the price differential will pay for the air fare and still leave some cash to spare!

Great round up, and we do have some serious price issues in the Australian watch market. Often it's the same price (or cheaper) to fly overseas and buy a watch at full retail. Craziness.